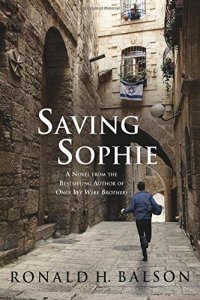 This is the follow up to Once We Were Brothers, a hugely popular by word-of-mouth book that was originally self published, then picked up by St. Martins. Ron Balson is a practicing attorney in Chicago so writing novels is his second career, and he’s quite good at it.

The two protagonists from Once We Were Brothers, private investigator Liam and attorney Catherine, return here and move between Chicago and the Middle East. The story opens with the theft of 88 million dollars and a man on the run, and we don’t know anything at all about the whys or hows of it. And then we learn…

The titled “Sophie” is a young girl who has been kidnapped by her maternal grandfather and taken to his fortress of a home in Palestine.

Sophie’s father, Jack Sommers, is heartbroken. His wife had died and when his in-laws sued for custody, trying to prove he was an unfit father, they lost their case. But Jack felt bad about cutting off his daughter from her grandparents, so he suggested visitation once a month. On their third visit, they disappeared with Sophie.

Jack is a lawyer and he manages to embezzle money in hopes of paying ransom and getting his daughter back. He disappears, but his partners in crime end up dead and there is still no sign of anyone getting Sophie back to him. Liam and Catherine are hired to find the money and Jack Sommers, and in the process agree to try and help Jack get his daughter back.

The story moves to the Middle East and Balson does a phenomenal job of interspersing the history of Zionism, the state of Israel and all the fighting in the Middle East going back to biblical times, creating a fascinating back drop to the present day story.

Turns out grandpa is from a long line of terrorists, and is in the middle of planning a September 11th size attack using biological warfare, creating a terrifying culmination to the story.

This is another exciting thriller from a terrific storyteller.

This entry was posted on Saturday, March 5th, 2016 at 6:00 AM and is filed under Book Reviews, Crime Fiction, Fiction. You can follow any responses to this entry through the RSS 2.0 feed. Both comments and pings are currently closed.