THE CAIRO CODE by Glenn Meade 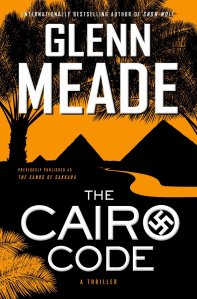 Novels about love existing during the course of war and the strains put upon the lovers by the conflict raging about them are plentiful. The Cairo Code is an excellent book revolving around a segment of World War II and the parts three people play in the drama.

U.S. President Franklin D. Roosevelt and British Prime Minister Winston Churchill met in Cairo, Egypt during November 1943 in order to discuss plans going forward for operation Overlord, the invasion of Europe at a near future date. Hitler had the impression that if this invasion were allowed to take place, it would be the capstone on the defeat of Germany, which he felt was already started. He ordered the assassination of both Roosevelt and Churchill, with the emphasis on murdering the US president as primary.

Major Johann Halder, a brilliant agent of the Abwere, was assigned to head the attempt along with Rachael Stern, an Egyptologist, to accompany him to supply credibility that they were in Cairo to reexamine tombs. Their families had been excavating those tombs prior to the war. Stern, of Jewish descent, was being held at a concentration camp and released to Major Halder with the promise that she would be freed after the successful venture, as well as her parents, who were also being held prisoner by the Nazis.

The Americans, getting wind of the plot, assigned Lt. Colonel Harry Weaver to go after Halder and his party. Weaver was one the best officers the U.S. had and was thought to be the soldier that could foil the plot. The caveat in this was that Harry, Halder and Rachel had  been together at excavations in Egypt with their families prior to the war. They had been close friends but both Harry and Johann fell in love with Rachel, and never knew whether or not she was in love with either of them.

The story revolves around the chase between Harry and his two friends, and if any of them would be able to actually kill their former friends or object of love.  Meade handles the sequences of the chase and reactions of both sides with knowledge that they were facing former great friends and what they would do if they actually met. There was an attempt by the Nazis to kill Roosevelt at the Cairo conference in real life which obviously did not succeed. But the major thrust of Meade’s story involves love tested by being on opposite sides during a world war.

Extremely well done novel with the reader easily being caught up in the emotions and activities of both sides. The ending is not at all telegraphed but does leave the reader with the impression that he or she has just finished one of the most satisfying stories written in a long time.

This entry was posted on Sunday, March 6th, 2016 at 6:00 AM and is filed under Book Reviews, Crime Fiction, Fiction. You can follow any responses to this entry through the RSS 2.0 feed. Both comments and pings are currently closed.