I still enjoy this series, but I was a bit disappointed in this latest entry. I thought last year’s Tricky Twenty-Two was the best book in years, so I was hopeful for this one. While Evanovich kept the shorter length which worked well in 22, this one felt longer. Really long.

It starts off silly, which we have come to expect and enjoy. Stephanie is out to pick up her latest bounty runner but he takes off in an ice cream truck. She causes it to stop, the subject takes off and a dead guy falls out of the back of the truck. Not just dead – frozen, dipped in chocolate and covered in nuts. A dead Bogart Bar, as it were.

Lula is back of course, and she’s hatched a plot with Randy Briggs. The two of them are creating demo tapes to submit to Naked & Afraid, the Trenton edition, with varying results. Meanwhile Ranger offers Stephanie a chance to earn extra money. She goes undercover at the ice cream factory to try and figure out what’s going on. But all she finds is another frozen body and she’s not happy about it.

Stephanie and Joe are still together, and she’s constantly tempted by Ranger as well. Her mother is ironing like mad, Grandma Mazur has a boyfriend, and all sorts of hijinx ensue.

I found the first half really slow moving but it picked up after that. The usual jokes, exploding cars and so forth abound and fans will enjoy.

Comments Off on TURBO TWENTY-THREE by Janet Evanovich |

THE MAN WHO WANTED TO KNOW EVERYTHING by D.A. Mishani 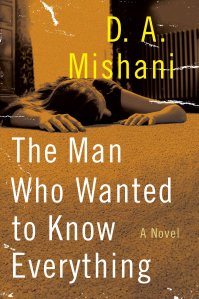 In this third entry in the Avraham series set in Tel Aviv, the detective investigates his first murder case. The victim is a 60-year-old widow, and Avraham is surprised to see that he knows her.

A neighbor reported seeing a policeman in the building around the same time as the murder, but the higher ups don’t want to hear about that or publicize it in any way. Avraham is also dealing with his girlfriend, who recently moved in with him after moving from Brussels. Avraham struggles with his personal problems and his murder case, especially when his bosses zero in on a suspect he is not convinced did it.

Mazal Bengtson realizes her marriage is in serious trouble, and when her husband tells her he may have hurt someone in a hit and run accident, she realizes there may be more to his story than he’s telling.

The case slowly unfolds and the translation by Todd Hasak-Lowy is occasionally awkward or politically incorrect (“yesterday night”; “Do I look retarded to you?”) and that awkwardness tended to pull me out of the story. Nonetheless, this should appeal to readers who enjoy international police procedurals, books set in Israel, or Liam Shoham novels.

Copyright ©2016 Booklist, a division of the American Library Association.

Comments Off on THE MAN WHO WANTED TO KNOW EVERYTHING by D.A. Mishani |

A CERTAIN RETRIBUTION by Michael Lister

Investigative reporter Merrick McKnight is back in this sequel to Thunder Beach, set in his hometown of Wewathitchka, called “Wewa” by the locals, in Northern Florida.

Somehow recovered from losing his wife and son, he runs into Reggie Summers, a beautiful young woman that McKnight had a crush on in high school, but now seems to be lacking in self-esteem. She’s a single mom and thinks herself somehow inadequate and beneath the notice of the reporter whom she admires.

The police department in this small town is corrupt, and McKnight is there investigating when a cop is killed, apparently with his own gun.

This is a gristly tale of cop killers and small town corruption, but also a romance between McKnight and Summers, and to complicate things even further, author Michael Lister makes an appearance as himself; a mystery writer much admired in this small town. This book is advertised as a twentieth anniversary celebration of Lister as a novelist, so there are several nods to twenty years of history here. The setting is atypical for Florida novels and is interesting in of itself, and lots of dialogue helps move the story along.

Comments Off on A CERTAIN RETRIBUTION by Michael Lister |

WANT YOU DEAD by Peter James

In this tenth entry into the Detective Superintendent Roy Grace series, Grace is preparing for his wedding to Cleo. His long missing wife, Sandy, has been declared dead, but is she?

That is but a minor footnote to this story, which centers on Red Westwood, a young woman being stalked by her ex, Bryce Laurent, a brilliant psychopath, who blames her parents and the police for their break up. Everything was fine until her mother hired a private detective and found out that Laurent had lied about pretty much everything in his past.

Laurent has some serious skills, including pyrotechnics, bomb building, close up magic, and high tech skills beyond that of the police. Red, a realtor, knowing she’s being stalked, refuses to move, fudges her whereabouts when making appointments to show properties to strangers, and in general is just too stupid to live.

Nevertheless, she gets through her days while Laurent plans her demise, frightening her on a regular basis and not caring how many die as he destroys everything and everyone she holds dear.  Short chapters help make the pages fly, and the suspense builds strongly until the expected ending.

Comments Off on WANT YOU DEAD by Peter James |

THE BURNING ROOM by Michael Connelly

This is the latest Harry Bosch novel, and it is another excellent addition to the series and frankly, I’m running out of superlatives to describe Connelly’s work.

Harry is still working with cold cases, but has a new partner, Lucy, a young Latina woman who has distinguished herself early in her career. Being Harry, he has his doubts about her but is willing to give her a chance.

They are assigned a rather unusual case; a mariachi player had been shot ten years earlier and incapacitated, and the shooter was never found. The man has just died and with the bullet finally extracted, the case has new information available.

Harry and Lucy make a good team. He’s got the investigative skills, and she’s got the techie skills and both are zealous about their work. But when it appears local politicians may be involved, things get “hinky,” as Harry would say.

Harry is getting older and is in his last year of the DROP, a forced retirement program that is costing the Los Angeles Police Department a ton of money. He knows that administration is looking at any excuse to cut people from the DROP and save a few bucks, which just adds to the stress of the job. And for me, seeing Harry so close to the end of his career is bittersweet; I can’t imagine the series ending, so I’m hoping it takes a turn in some way. Harry’s always been so scornful of private investigators, but it is always an option I guess, or maybe more of a merge with the Lincoln Lawyer series? Just speculating…

Michael Connelly is the undisputed king of the police procedural, and The Burning Room is a superlative example.

Comments Off on THE BURNING ROOM by Michael Connelly |

BED OF NAILS by Antonin Varenne

Police lieutenant Richard Guérin works suicides in Paris, a thankless job that has led his predecessors down a rocky road, but he thrives on it. Guérin is a cop with scruples, working in a very dirty division. He has to determine whether it was suicide or murder when an oncoming truck kills a smiling young man running naked down a major thoroughfare.

Another strange suicide case lands on his desk when Alan Musgrave, a junkie, supposedly killed himself on stage in a private S&M club. Musgrave’s friend, American John Nichols, is living off the grid in southern France, but is forced to return to Paris to identify the body. Nichols finds the suicide call suspicious, and ends up working with Guérin on the investigation.

As more bizarre suicide cases land on his desk, Guérin puts his extraordinary puzzle solving skills to the test, finding the common thread that confirms his philosophy that “everything is connected.”

There are lots of interesting characters here, including Guérin’s dim-witted assistant, a Parisian park keeper who also happens to be an ex-con, and a beautiful German artist who covers her naked body in paint and flings herself at canvas.  Guérin’s foul-mouthed parrot, inherited from his deceased mother, a former prostitute, adds an occasional lighter moment to this dark police procedural, winner of the Prix Quai du Polar crime fiction award in France.

For readers who enjoy Fred Vargas, the same translator does fine work here.

Comments Off on BED OF NAILS by Antonin Varenne |

DEAD TO ME by Cath Staincliffe

A young woman is murdered in Manchester, England, and the Murder Investigation Team, headed by the formidable Gill Murray, gets the case.

Gill is good friends with one of her detectives, Janet Scott, a 25-year veteran who loves her job. Rachel Bailey is a young cop who has escaped a tough childhood, and she is smart and ambitious. Murray teams Bailey up with Scott and puts them on the murder case.

Scott is not happy with the arrogant and overzealous Bailey, and Bailey thinks there is something wrong with Scott because she has never tried for a promotion. They uncover a rape that may be related, find a roving drug dealer that may have been the last person to see the young woman alive, and investigate an unsavory boyfriend that the mother is convinced is the murderer.

Janet is a rules oriented, methodical detective while Rachel is headstrong and thinks and acts outside the box. Working together is a nightmare for both of them, but gradually they learn to respect each other as they work the case through to the shocking ending.

But this is much more than just a murder mystery; these characters are well developed, idiosyncratic and likeable, and that extends to their families and co-workers as well. Most reminiscent of the Cagney and Lacy TV series, this should appeal to readers who enjoy female buddy books like the Rizzoli and Iles series by Tess Gerritsen, the Women’s Murder Club series by James Patterson & Maxine Paetro, or even Lisa Scottoline’s Rosato & Associates legal series.

This book is actually a prequel to a popular British TV series, “Scott and Bailey,” now in its fourth season in the UK and airing on some PBS stations in the U.S. Visit the “Scott and Bailey” Facebook fanpage for more info.

Copyright © 2013 Booklist, a division of the American Library Association.

1/14 Stacy Alesi, AKA the BookBitch

Comments Off on DEAD TO ME by Cath Staincliffe |