HOUSE ON FIRE by Joseph Finder 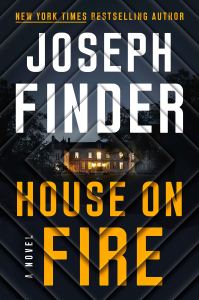 Nick Heller is at the top of his game when he receives some devastating news: his old army buddy Sean has died of an overdose. Sean, who once saved Nick’s life, got addicted to opioids after returning home wounded from war.

Then at Sean’s funeral, a stranger approaches Nick with a job, and maybe also a way for Nick to hold someone accountable.

The woman is the daughter of a pharmaceutical kingpin worth billions. Now she wants to become a whistleblower, exposing her father and his company for burying evidence that its biggest money-maker was dangerously addictive. It was a lie that killed hundreds of thousands of people, including Sean.

All Nick has to do is find the document that proves the family knew the drug’s dangers. But Nick soon realizes that the sins of the patriarch are just the beginning.

Beneath the surface are barely concealed cabals and conspiracies: a twisting story of family intrigue and lethal corporate machinations. In a deadly game of chess that pits Nick against a family dynasty, against brothers and sisters with schemes of their own, Nick learns how far his enemy is willing to go to protect its name and its wealth.

There are commonalities about novels written by Joseph Finder that make him one of today’s top authors. These are excellent plots, well defined principal characters, a writing style that allows his readers to dive into the story, and reading it generally in one rewarding session. “House on Fire” is no exception and is easy to classify as a mesmerizing five star read.

Nick Heller, a private investigator used in previous novels by the author, is front and center in this book. Nick receives the unwelcome news that a good friend of his has died from an overdose of opioids and he is invited to the funeral. Once there he meets the daughter of the man in charge of the pharmaceutical company that manufactures and distributes the drug that his friend was hooked on and which killed him. The woman tells Nick that she has made it her life’s work to find evidence, indicated as suppressed, of the drug’s becoming addictive and harmful to the taker. She hires Nick to help her find the derogation study, known to exist, and help victims of the opioid go against her family’s company in order to collect funds that could help them financially in surviving their lives of drug dependency.

The story moves Nick through meeting the family at a dinner and then again while attending a corporate sales meeting as a guest of the lady that hired him. Finder takes the reader through the politics of the family owning the company and paints a realistic picture of what undoubtedly goes on in any situation where a great deal of money is involved. Who hates who, who loves who and what are the schemes to keep on the good side of the patriarch of the family who controls who gets what. Nick had lost his wife in a previous novel and while not actively searching for another has several instances of sexual activity in “House on Fire.” This, in no surprise, includes the woman that hired him to help find evidence against the company that she and her family have an interest in. The addition of a little spice serves to make Nick a human being with normal needs rather than a superman.

The ending is one with an interesting twist but becomes logical as the story unfolds. As stated it is a five-star novel, and the only thing that is negative is that Joseph Finder does not dash off novels one after the other but takes his time and it is usually at least a year between them. But certainly, it is well worth the wait.

This entry was posted on Wednesday, February 5th, 2020 at 8:00 AM and is filed under Book Reviews, Crime Fiction, Fiction. You can follow any responses to this entry through the RSS 2.0 feed. Both comments and pings are currently closed.