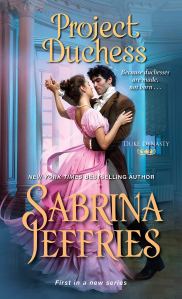 From New York Times bestselling author Sabrina Jeffries comes a sparkling new series about an oft-widowed mother’s grown children, who blaze through society in their quest for the truth about their fathers . . . and in the process find that love just might conquer all . . .

A series of stepfathers and a difficult childhood have left Fletcher “Grey” Pryde, 5th Duke of Greycourt, with a guarded heart, enviable wealth, and the undeserved reputation of a rogue. Grey’s focus on expanding his dukedom allows him little time to find a wife. But when his mother is widowed yet again and he meets the charmingly unconventional woman managing his stepfather’s funeral, he’s shocked to discover how much they have in common. Still, Grey isn’t interested in love, no matter how pretty, or delightfully outspoken, the lady . . .

Beatrice Wolfe gave up on romance long ago, and the arrogant Duke of Greycourt with his rakish reputation isn’t exactly changing her mind. Then Grey agrees to assist his grief-stricken mother with her latest “project”: schooling spirited, unfashionable Beatrice for her debut. Now that Beatrice is seeing through Grey’s charms to his wounded heart, she’s having trouble keeping him at arm’s length. But once Grey starts digging into her family’s secrets, she must decide whether her loyalties lie with her family . . . or with the man whose lessons capture her heart . . .

Sabrina Jeffries writes a good, steamy romance so I was very happy to see she is starting a new series. Because it is the first book in the series, there are a lot of characters, but she does a good job of introducing them without overwhelming. Grey is our hero, and he is a man with a difficult past. Even dukes can have baggage, (apparently to this day!) and his troubled childhood has left him wary of letting anyone in. But when he meets Beatrice, her refreshing way of speaking her mind disarms him.

Beatrice has been living out in the country in pretty much isolation, other than her extended family and the help. She and Grey have much in common, they both lost family members, and both have little use for pretense. But Grey’s mother, the thrice widowed dowager duchess, is determined to have Beatrice come out along with her daughter, Grey’s sister. To that end, while they are in mourning, they take the opportunity to teach the girls the graces, and subterfuge, that is necessary to succeed in London’s high society.

Grey is determined to never lose his heart and plans on marrying eventually, but in the way of much of the ton, purely for business reasons, for lack of a better term. But he is enraptured with Beatrice, fight it as he may. Not to mention Grey’s half-brother suspects Beatrice’s brother of killing two of their mother’s husbands. Yes, it is a bit complicated but that’s half the fun. A bit of mystery, some steamy sex, lots of secrets, and a big family all combine to create a terrific start to this new series. If you enjoy your romances historical, quick, fun, and sexy, then read this book. I’m very glad I did.

This entry was posted on Thursday, February 6th, 2020 at 8:00 AM and is filed under Book Reviews, Fiction, Romance. You can follow any responses to this entry through the RSS 2.0 feed. You can leave a response, or trackback from your own site.