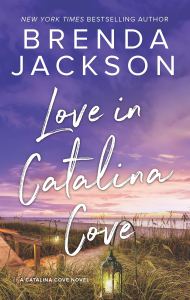 In her brand-new series, Brenda Jackson welcomes you to Catalina Cove, where even the biggest heartbreaks can be healed…

In the wake of a devastating teen pregnancy that left her childless and heartbroken, Vashti Alcindor left Catalina Cove, Louisiana, with no plans to return. Now, over a decade later, Vashti reluctantly finds herself back in her hometown after inheriting her aunt’s B and B. Her homecoming gets off to a rocky start when the new sheriff, Sawyer Grisham, pulls her over for speeding, and things go downhill from there.

The B and B, a place she’d always found refuge in when it seemed like the whole world was against her, has fallen into disrepair. When a surprising benefactor encourages Vashti to reopen the B and B, Vashti embraces a fresh start, and soon old hurts begin to fade as she makes new memories with the town—and its handsome sheriff…

But some pasts are too big to escape, and when a bombshell of a secret changes everything she thought was true, Vashti is left reeling. With Sawyer and his teenage daughter determined to see her through the storm, though, she’s learning family isn’t always a matter of blood—sometimes it’s a matter of heart.

Am I finally getting the hang of reading a series in order? Maybe?

Getting a traffic ticket is the meet-cute here. The sparks fly between them and as much as they try and fight it, ultimately they can’t.

A charming small seaside town makes for a lovely setting. I just wish some old aunt would leave me her bed & breakfast but that is not my lot in life. It works in many Hallmark movies and romance novels though, and it certainly works here. I liked the Creole heroine but I wish there was a bit more reference to the culture, maybe that will come in further books in the series.

I really cared about these characters and I wanted them to get together. I loved the relationship Sawyer had with his daughter and that Vashti had with her as well. There are some really good twists in the story – one I saw coming but the other was quite the shocker.

I didn’t care as much for the sex scenes, I don’t think they were especially well done or believable. Writing about sex is not easy and in this case, I would have preferred a lot less of it (which is really not like me!)

Despite that, it was a very good read and I will definitely be looking for the next book in this series.

This entry was posted on Saturday, December 29th, 2018 at 6:00 AM and is filed under Book Reviews, Fiction, Romance. You can follow any responses to this entry through the RSS 2.0 feed. Both comments and pings are currently closed.