THE OTHER MISS BRIDGERTON by Julia Quinn 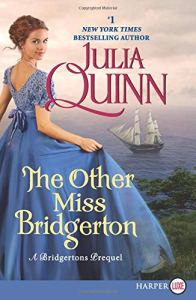 She was in the wrong place…

Fiercely independent and adventurous, Poppy Bridgerton will only wed a suitor whose keen intellect and interests match her own. Sadly, none of the fools from her London season qualify. While visiting a friend on the Dorset coast, Poppy is pleasantly surprised to discover a smugglers’ hideaway tucked inside a cave. But her delight turns to dismay when two pirates kidnap her and take her aboard a ship, leaving her bound and gagged on the captain’s bed…

He found her at the wrong time…

Known to society as a rascal and reckless privateer, Captain Andrew James Rokesby actually transports essential goods and documents for the British government. Setting sail on a time-sensitive voyage to Portugal, he’s stunned to find a woman waiting for him in his cabin. Surely, his imagination is getting the better of him. But no, she is very real—and his duty to the Crown means he’s stuck with her.

Can two wrongs make the most perfect right?

When Andrew learns that she is a Bridgerton, he knows he will likely have to wed her to avert a scandal—though Poppy has no idea that he is the son of an earl and neighbor to her aristocratic cousins in Kent. On the high seas, their war of words soon gives way to an intoxicating passion. But when Andrew’s secret is revealed, will his declaration of love be enough to capture her heart…?

I thought that the kidnapping plot was passé, but Quinn brings it back and makes it work, provided you can suspend your disbelief. And I did.

While the publisher’s description calls the men pirates, as does Poppy, they are in fact privateers, a higher class of scoundrel and one usually supported by the Crown. As is the case here, plus a nice twist, that “Captain James” is in reality, a spy of sorts, a courier for the government. But it is a secret, and he cannot tell Poppy his real name or occupation. Nevertheless, she finds herself strongly attracted to him, and he to her.

During her two seasons, Poppy discovered that she couldn’t abide a man who refused to see or appreciate her intellect, and that left her woefully short of suitors that suited. But the Captain delighted in her quick wit and inquiring mind, and she in his.

After being cooped up on the ship for weeks, Captain James takes Poppy to his favorite tavern in Lisbon where they run into some trouble. Just when you think it will be smooth sailing, everything goes awry. But no worries, this is a romance after all, so they do find their happy ending.

This entry was posted on Monday, November 26th, 2018 at 9:06 AM and is filed under Book Reviews, Fiction, Romance. You can follow any responses to this entry through the RSS 2.0 feed. Both comments and pings are currently closed.