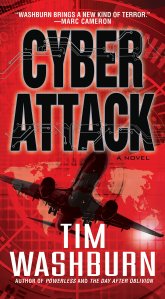 “Cyber Attack” is not the first novel to be written revolving around a cyber attack on the United States. It is, though, one of the most realistic and hard hitting that I’ve read so far. It also delineates the fact that it can be mounted by a relatively small group of computer experts and be very effective.

Such is the situation in Washburn’s story when five men, financed and trained by one individual, successfully initiate action against vulnerable areas in the U.S. doing immense damage to both people and infrastructure.

Utilizing individual reactions to the various sectors attacked allows the full horror to unfold. There is an attack on Chicago stopping all computer related equipment bringing the city to a complete halt, another on a maximum security prison causing a pitched battle between prisoners and the national guard. A third targeting a battleship at sea for testing of their weapon systems and misdirecting the firing to other targets. Planes fall from the sky as their computerized flight systems are stopped.

The horror of what is happening unfolds and aptly brings the situation forcefully to the reader. Washburn takes the opportunity to bring out his personal opinion that due to rivalries among groups in both the military and government the United States is woefully not ready to fully combat the type of attack described.

Two FBI agents, Hank Goodnight and computer programmer Paige Randall, are assigned to attempt to stop the hackers. They are specifically trained to combat fire with fire in order to find and destroy those individuals attacking the nation. Their progress coupled with the work of many government agencies provides the defense mounted. At the same time the reasons for the attack are described and indicate the motivations of the attackers.

A frightening story and one that the author surely means as a wake up call. Excellent and mesmerizing read.

This entry was posted on Tuesday, November 27th, 2018 at 6:00 AM and is filed under Book Reviews, Crime Fiction, Fiction. You can follow any responses to this entry through the RSS 2.0 feed. Both comments and pings are currently closed.