THE BISHOP’S PAWN by Steve Berry 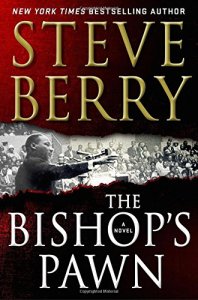 Steve Berry and his wife Elizabeth are both ardent advocates of historical preservation. Their passion has taken them to a multitude of places and sites as well as the founding of a charitable foundation, “History Matters,” to raise both awareness as well as money to preserve historical places. Many of Berry’s novels have had a little known historical event become the basis for the story told in the book.

Bishop’s Pawn is the latest adventure of Berry’s main protagonist Cotton Malone, but includes several changes in the format of the story. It is written in first person with Malone being the one telling the story. It is also out of the continuing time sequence of Malone’s career with the Magellan Billet, a secret group attached to the Justice Department. Insteaed, we are taken to the beginning of Cotton’s work for Stephanie Nelle, who founded the Magellan Billet and is the supervisor.

Eighteen years ago Malone was working as a lawyer in the Navy and trying to outgrow his reputation as a maverick. He is approached by Stephanie and asked to help with an investigation currently underway by the Justice Department. Cotton takes the assignment with the hope of getting into a situation other than his present tedious job with the JAG.

Cotton then finds himself involved with an extremely rare coin and a set of documents that provide explosive data on the assassination of Dr. Martin Luther King, Jr. Malone becomes embroiled in a war between the Justice Department and the F.B.I. for possession of both objects.

Dr. King is pictured here as the giant that he was in the early days of the Civil Rights movement, but also shown as a man with faults and hesitations. The real life war between the F.B.I. and Dr. King is brought vividly into the scenario.

J. Edgar Hoover, the head of the F.B.I. at the beginning of Dr. King’s work, had an obvious hatred for the man. Hoover ordered wire taps, surveillance, and branded Dr. King as a trouble maker all against orders from Congress. Berry brings out the distinct possibility that Hoover ordered the assassination of Dr. King and was instrumental in bringing James Earl Ray, Dr King’s killer, conveniently into the picture in order to do the actual shooting.

The book is a fascinating study of both the events surrounding Dr. King’s assassination and portraits of some of the individuals that both worked for and against him. Berry eloquently pictures the F.B.I. as Hoover’s fiefdom, and due to the secret files held on many people by him, was able to establish total control over the organization as well as becoming a law unto himself.

The ending consists of the airing of Berry’s thoughts about the assasssination with actual facts presented to back up his theory. I feel that while Steve Berry may have written better books, Bishop’s Pawn is beyond any doubt the most thought provoking of them. Totally mesmerizing and the “king” of all nighters.

This entry was posted on Wednesday, March 21st, 2018 at 6:00 AM and is filed under Book Reviews, Crime Fiction, Fiction. You can follow any responses to this entry through the RSS 2.0 feed. Both comments and pings are currently closed.