THE OLD MAN by Thomas Perry 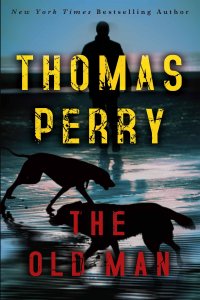 The refrain from an old song is “The Old Man ain’t what he used to be.” But Dan Chase is the very viable exception to that supposed rule.

Thirty five years before the story begins, Dan was an extremely capable agent for U.S. Army Intelligence. He was sent to Libya to covertly assist a rebel army by presenting 20 million dollars to a man acting as the agent for the rebels. The deal went sour when Dan found that said agent had kept the funds. He acted based on his own assessment of the situation and absconded with the money. Now 35 years later he is living in Vermont, retired, a widower with a grown daughter on her own. He has two huge dogs to keep him company.

Unlike other retirees, Dan has amassed a cache of “survival” gear including weapons, cash, fake passports and licenses. And just when he believes himself safe after all the years that have passed since the action in Libya, he is attacked by mercenaries that want to kill him. His instincts propel him into action that finds him embroiled in fighting hired killers, stuck in a precarious car chase, and not knowing if those hunting him were hired by the man in Libya from whom he took the cash, or his previous employer, the US government.

In fleeing from his home in Vermont, he rents a room in an apartment owned by a divorcee who happens to be attractive and drawn to Dan. When he is forced to leave this apartment and flee his enemies the woman goes with him and apparently is in love with him.

Perry’s writing is fast, compelling, and draws in the reader. The only reservation I experienced was that the ending is sudden and too pat. This does not make the reading experience any less enjoyable, just not fitting the temper of the rest of the novel. But I certainly would look for a sequel and pick it up if Perry decides that he would like to go in that direction.

This entry was posted on Wednesday, January 4th, 2017 at 6:00 AM and is filed under Crime Fiction, Fiction. You can follow any responses to this entry through the RSS 2.0 feed. Both comments and pings are currently closed.