THE GRAVEYARD SHIFT by Jack Higgins 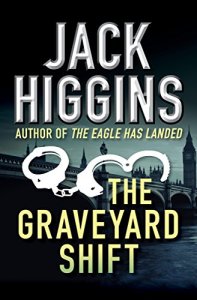 The Graveyard Shift was originally published in 1985 and re-released in 2008. The ebook version is now available.

Written before Higgins’ blockbuster hit, The Eagle has Landed, the novel is a classic example of mid-twentieth century hard boiled detective works. True to methods established in later Jack Higgins books, it establishes a prime character that can later be used as the centerpiece in future novels. Detective Sargent Nick Miller is a college educated young career policeman: he is perceptive, bright and certainly unorthodox in his methods.

After nine years in prison, Ben Garvald has been released. Neither his wife nor his sister-in-law are happy with that fact. His sister-in-law goes to the police and asks for protection from Ben for both herself and Ben’s wife. The police assign Nick Miller to look into the matter much to the dismay of an associate of his who has more time with the police and is actually a subordinate of his.

A factor that is also important to the police is the matter of money stolen during the crime that Ben has been imprisoned for and never recovered. Nick’s subordinate decides to go after Ben on his own thinking that when he recovers the money he will enhance his reputation on the force. The two policemen move out and the novel becomes a well done crime story. Like his later books, The Graveyard Shift keeps the reader riveted and at the end sure that Nick Miller will be back.

This entry was posted on Tuesday, January 3rd, 2017 at 6:00 AM and is filed under Crime Fiction, Fiction. You can follow any responses to this entry through the RSS 2.0 feed. Both comments and pings are currently closed.

One Response to THE GRAVEYARD SHIFT by Jack Higgins