No summer doldrums here…just an awesome collection of signed thrillers!

THE DEVIL’S BRIDGE by Linda Fairstein
In her seventeenth Alexandra Cooper thriller, New York Times bestselling author Linda Fairstein takes readers where they have never been before: Inside the mind of NYPD Detective Mike Chapman. Nelson DeMille says Fairstein is “one of the best crime fiction writers in America today.”

CENTER OF GRAVITY by Laura McNeill
Center of Gravity weaves a chilling tale, revealing the unfailing and dangerous truth that things—and people—are not always what they seem. Booklist says, “Readers will find this tale of domestic suspense deeply compelling as a once-happy family unit disintegrates and a woman summons her heretofore hidden strength. Told from multiple perspectives, McNeill’s gripping tale explores family, trust, and how lives are rebuilt.”

THE ULTIMATE THREAT by James Osborne
Mark is in the way of ISIS’s plans – and they want him removed. Can Mark stave of ‘The Ultimate Threat’ in his mission to save not only his family but the freedom of America as well? Osborne is a novelist and the author of more than 100 short stories. His award-winning stories have appeared in numerous anthologies, both in print and online.

BELIEVE NO ONE by A.D. Garrett
The race is on to catch a serial killer and save a nine-year-old boy in this gripping sequel to A. D. Garrett’s highly praised forensic thriller, Everyone Lies In a starred review, Publishers Weekly says, “Fine attention to forensics and investigative techniques distinguishes this stellar thriller.”

SILENT CREED by Alex Kava
Ryder Creed and his K9 search-and-rescue dogs return in the second installment of an exciting new series, teaming up once more with FBI profiler Maggie O’Dell in their riskiest case yet. Publishers Weekly says, “Exciting . . . . [an] intense thriller, which builds to an explosive conclusion.”

THE ETERNAL WORLD by Christopher Farnsworth
If you could live forever, what would you die for? Kirkus Reviewsays, “A fantastical witch’s brew of Spanish conquistadors, biotechnology, and hubris . . . with cinematic pacing and colorful action scenes, Farnsworth blends a unique premise into fun summer reading . . . entertainingly explores the border where science fantasy meets reality.”

BLACK-EYED SUSANS by Julia Heaberlin
Shocking, intense, and utterly original, Black-Eyed Susans is a dazzling psychological thriller, seamlessly weaving past and present in a searing tale of a young woman whose harrowing memories remain in a field of flowers—as a killer makes a chilling return to his garden, sure to appeal to fans of Laura Lippman and Gillian Flynn. Publishers Weekly says, “Gripping . . . The suspense builds as Tessie uncovers devastating secrets from the past en route to the shocking ending.”

You can win autographed copies of all these books! If you are new to the site, each month I run a contest in conjunction with the International Thriller Writers organization. We put together a list of books from debut authors to bestsellers, so you can win some of your favorites and find some new favorites.

What makes this contest really special is that all of the books (except eBooks) are signed by the author!

Don’t forget, if you subscribe to the newsletter or follow this blog, you get an extra entry into every contest you enter. Check out the Win Books  page for more information on all these books and how you to enter this month’s contest.

Thanks for reading, and good luck!

Just wanted to add congratulations and thanks to the

November winner for sending in this picture! 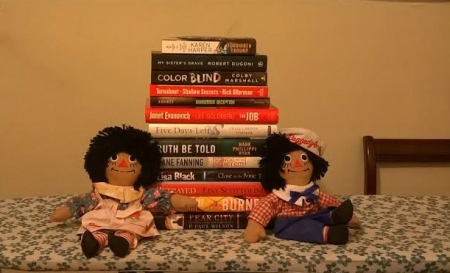 This entry was posted on Saturday, August 1st, 2015 at 4:00 AM and is filed under Contests. You can follow any responses to this entry through the RSS 2.0 feed. Both comments and pings are currently closed.

3 Responses to Win the August ’15 bookshelf of signed thrillers!