ASHES TO DUST by Yrsa Sigurdardóttir 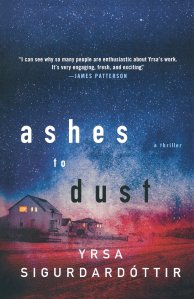 Thora is used to odd cases but her latest seems innocent enough at the start. Markús and his family were residents on Heimaey Island when the volcano erupted in 1973. Their house, along with many others, was buried under layers of ash and abandoned in the aftermath. Now, a group has begun excavating those houses and Markús has tried everything to stop his from being dug up.

Thora is unable to halt the excavation, but she is able to get Markús permission to be the first to enter the house’s basement. He swears, though, that he knew absolutely nothing about the three murdered men and the disembodied head that he found when he entered under Thora’s watchful eye. Now Thora’s job has gone from a simple intervention to a full-blown murder investigation. If she can’t prove that Markús not only had no part in what was hidden in his family’s basement but that he also had no previous knowledge of the apparent crime, he’ll go away for murder. And when the only witness who could prove Markús’s innocence is also found dead, Thora begins to worry that her task could be an impossible one.

This third in the Thora Gudmundsdóttir series begins with one of the most bizarre murders I’ve ever read. And it does set the tone for the rest of the book. Once again Sigurdardóttir weaves fascinating Icelandic history into the story – the eruption on Heimaey Island and the Cod War (yes, Cod War).

I do love the setting and Thora, but there are some little inconsistencies throughout the story that I generally have to err on the side of being possibly lost in translation. It was pretty maddening, though, when the characters kept returning to what seemed like very apparent clues without ever unraveling them. Regardless, I have to say I’m a solid fan of Sigurdardóttir and her work. Each book proves to be more weird and twisted than the one before.

This entry was posted on Thursday, March 12th, 2015 at 1:00 PM and is filed under Book Reviews, Crime Fiction, Fiction. You can follow any responses to this entry through the RSS 2.0 feed. Both comments and pings are currently closed.