ONE BY ONE by Ruth Ware 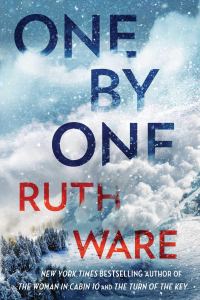 The #1 New York Times bestselling author of The Turn of the Key and In a Dark Dark Wood returns with another suspenseful thriller set on a snow-covered mountain.

Getting snowed in at a luxurious, rustic ski chalet high in the French Alps doesn’t sound like the worst problem in the world. Especially when there’s a breathtaking vista, a full-service chef and housekeeper, a cozy fire to keep you warm, and others to keep you company. Unless that company happens to be eight coworkers…each with something to gain, something to lose, and something to hide.

When the cofounder of Snoop, a trendy London-based tech startup, organizes a weeklong trip for the team in the French Alps, it starts out as a corporate retreat like any other: PowerPoint presentations and strategy sessions broken up by mandatory bonding on the slopes. But as soon as one shareholder upends the agenda by pushing a lucrative but contentious buyout offer, tensions simmer and loyalties are tested. The storm brewing inside the chalet is no match for the one outside, however, and a devastating avalanche leaves the group cut off from all access to the outside world. Even worse, one Snooper hadn’t made it back from the slopes when the avalanche hit.

As each hour passes without any sign of rescue, panic mounts, the chalet grows colder, and the group dwindles further…one by one.

Ruth Ware continues her writing of solidly written, entertaining, and well-plotted novels with a murder mystery set in a ski resort that has been snowbound due to a major storm. Erin and Danny work for a company that leases rooms at these resorts to people interested in spending a few days both on the ski slopes as well as having the luxury of a well-run hotel at their disposal. Danny is the chef and the person preparing the meals for the guests with Erin acting both as the hostess and the maid for them. We learn early on that Erin has a background that includes a major personal crisis.

As the story opens, a group from a tech company named “Snoop” which has successfully developed a product that can follow anybody electronically without their knowledge and allow them to be spied upon, has booked the resort for a few days. They are in the process of possibly receiving a buy out by another company which will mean fortunes for the current stockholders: all of whom are at the meeting. There are two of the guests that are opposed to the buy out feeling that once their product is released to the public the stock they own will be worth more than any purchase by another company.

Since the group is at a ski resort it is decided that they will go out and do a downhill run on their first day there. There are a few good skiers among them coupled with others with lesser skills. Unfortunately, tragedy strikes immediately. One of the groups with lesser ability does not return to the resort with the others. Using their own product the determination is made that that woman’s phone is buried under tons of snow and that she must have been killed. The police are called but cannot come immediately due to the imminent arrival of a major snowstorm. That storm hits and causes the resort to become isolated with no possibility of either leaving or having anyone come to them.

In the vein of Agatha Christie’s classic “And Then There Were None,” people begin dying bringing terror to the group afraid of being next on whatever list is being used to decide who is to be killed. The story is told via a series of first-person narratives and we clearly follow the plot until a good who done it reaches its inevitable end. The use of a ski resort being snowed in provides an interesting twist to Ware’s tale of murder and is another landmark on her reputation as a skilled author.

This entry was posted on Wednesday, September 9th, 2020 at 8:00 AM and is filed under Book Reviews, Crime Fiction, Fiction. You can follow any responses to this entry through the RSS 2.0 feed. Both comments and pings are currently closed.