THE SILENT WIFE by Karin Slaughter 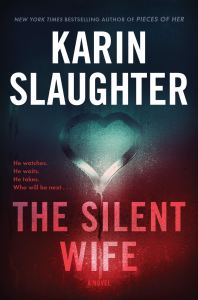 The New York Times bestselling author of Pieces of Her and The Last Widow returns with another electrifying thriller.

Investigating the killing of a prisoner during a riot inside a state penitentiary, GBI investigator Will Trent is confronted with disturbing information. One of the inmates claims that he is innocent of a brutal attack for which he has always been the prime suspect. The man insists that he was framed by a corrupt law enforcement team led by Jeffrey Tolliver and that the real culprit is still out there—a serial killer who has systematically been preying on women across the state for years. If Will reopens the investigation and implicates the dead police officer with a hero’s reputation of wrongdoing, the opportunistic convict is willing to provide the information GBI needs about the riot murder.

Only days ago, another young woman was viciously murdered in a state park in northern Georgia. Is it a fluke, or could there be a serial killer on the loose?

As Will Trent digs into both crimes it becomes clear that he must solve the cold case in order to find the answer. Yet nearly a decade has passed—time for memories to fade, witnesses to vanish, evidence to disappear, and lies to become truth. But Will can’t crack either mystery without the help of the one person he doesn’t want involved: his girlfriend and Jeffrey Tolliver’s widow, medical examiner Sara Linton.

When the past and present begin to collide, Will realizes that everything he values is at stake . . .

A brilliantly conceived story about a psychopath and one that is a complete one. A fiend that preys upon young women, capturing them, torturing them, and then raping their bodies after he has killed them. The author has used Will Trent, a detective with a police department in The Atlanta Georgia area, and his girlfriend Doctor Sara Linton, who is the medical examiner for the same police force. This is the 10th book featuring the two in the series, and I must comment that I like Slaughter’s treatment of them. They are normal police personnel, not super-beings pulling solutions miraculously out of the air. Both are dedicated to solving cases and bringing criminals to justice by slowly, but surely obtaining evidence in solving the crime.

In the book’s opening, Will is visiting a prison to interview a prisoner when he is pulled into talking to another man that claims he is innocent of a murder of a young woman and should not be jailed. Will, in thinking over what the second man told him, brings the situation to his department head and they decide to look into the matter. Their investigations unearth a series of murders in an area around Atlanta going back several years.

Karin Slaughter describes what has happened to the girls in great detail and it is not light reading. The descriptions describe the torture inflicted on them and the reader needs to understand that it is not gratuitous horror but the author’s need to bring out what women can go through when sick men decide to “punish” them. In an afterward, Slaughter does indicate that it was one of her intentions to bring out this situation.

Will and Sara’s group begin unearthing similar crimes that occurred in areas to the north of Atlanta and judicious study uncovers similar physical damages to the women inflicted by the murderer and which betray a knowledge of anatomy. Sara rereads accounts of the previous murders and skillfully sets up a profile of the killer. In two cases the victim has survived but will never completely recover mentally.

Slaughter describes the attempts to interview them, with both Will and Sara devastated by the accounts. The book is absolutely one that must be finished in one mesmerizing period after which some relaxation is necessary and time out awaiting the author’s next novel.

This entry was posted on Monday, August 10th, 2020 at 8:00 AM and is filed under Book Reviews, Crime Fiction. You can follow any responses to this entry through the RSS 2.0 feed. Both comments and pings are currently closed.