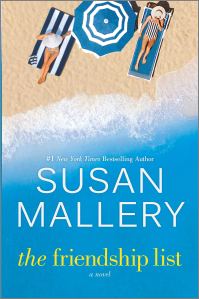 Single mom Ellen Fox couldn’t be more content—until she overhears her son saying he can’t go to his dream college because she needs him too much. If she wants him to live his best life, she has to convince him she’s living hers.

So Unity Leandre, her best friend since forever, creates a list of challenges to push Ellen out of her comfort zone. Unity will complete the list, too, but not because she needs to change. What’s wrong with a thirtysomething widow still sleeping in her late husband’s childhood bed?

The Friendship List begins as a way to make others believe they’re just fine. But somewhere between “wear three-inch heels” and “have sex with a gorgeous guy,” Ellen and Unity discover that life is meant to be lived with joy and abandon, in a story filled with humor, heartache and regrettable tattoos.

Ellen and Unity grew up together, growing especially close after Unity’s parents are killed while she was a teenager. Ellen’s family took her in, forging a bond as strong as sisters. When Ellen got pregnant in high school, her parents weren’t happy, to say the least, but they helped as best they could. When Ellen finally was on her feet, having moved out, was working and raising her son, her parents sold the house and moved away. Although they did give Ellen enough money for a down payment on a house, their relationship dwindled to seeing each other every few years and talking a couple of times a year.

It is understandable that the women consider each other family and have each other’s backs. When Unity loses her husband, she descends into a deep depression that even Ellen can’t get her out of. What she can do is be supportive, and she is. When Ellen’s overhears her son telling a friend he can’t go away to college because his mom needs him, she is crushed. As much as she dreads him leaving, she wants him to go and live his best life. But she knows he won’t unless he thinks she is as well.

After their biggest fight ever, Unity comes up with a list of challenges for each of them to help them move their lives forward. She doesn’t really think she needs it, she is fine living her life one day at a time as she marches to her own death. But she is only 34 years old, and as the women get competitive about the challenges, Unity slowly realizes that she does have some issues and is working on them.

Then there are the men in their lives. Ellen is great friends with Keith, a teacher at the school where she teaches as well. Keith is also a former NFL player and the football coach. He is a single dad with a teenage daughter, and often turns to Ellen for advice. Ellen’s son plays for the coach and they share a lot of their lives with one another. They chaperone a trip along the California coast taking several students, including their own kids, to visit several colleges right before they start their senior year of high school. All of a sudden, their relationship starts to change.

Unity has a handyman business and her best customers all live in a large retirement community. Unity not only fixes what they need, she joins several of the social groups and even a grief group. When one of the women she has grown close invites Unity to dinner, she is delighted to go. Except when she gets there she realizes her friend has set her up with her great-nephew, a very good looking, wealthy man. But those aren’t his best qualities; it turns out he is exceedingly kind, and sensitive, and has enormous patience, especially for Unity.

Mallery does a great job creating these characters and imbuing them with the innocence that their backgrounds make possible. As they complete the challenges they give one another, they are growing and learning about themselves, and what their futures may look like.

I really enjoyed reading this book. It was a lovely escape from reality, and I was sorry to turn the last page.

This entry was posted on Sunday, August 9th, 2020 at 8:00 AM and is filed under Book Reviews, Fiction, Romance, Women's Fiction. You can follow any responses to this entry through the RSS 2.0 feed. Both comments and pings are currently closed.