THE VIRGIN AND THE ROGUE by Sophie Jordan 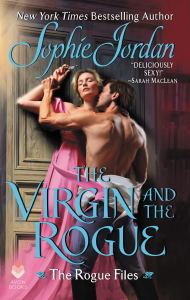 Continuing her bestselling Rogue Files series, Sophie Jordan brews up a scintillating romance about a timid wallflower who discovers a love potion and ends up falling for a dashing rogue.

Charlotte Langley has always been the prudent middle sister, so her family is not surprised when she makes the safe choice and agrees to wed her childhood sweetheart. But when she finds herself under the weather and drinks a “healing” tonic, the potion provokes the most maddening desire…for someone other than her betrothed.

Kingston’s rakehell ways are going to destroy him and he’s vowed to change. His stepbrother’s remote estate is just the place for a reformed rogue to hide. The last thing he wants is to be surrounded by society, but when he gets stuck alone with a wallflower who is already betrothed… and she astonishes him with a fiery kiss, he forgets all about hiding.

Although Charlotte appears meek, Kingston soon discovers there’s a vixen inside, yearning to break free. Unable to forget their illicit moment of passion, Kingston vows to relive the encounter, but Charlotte has sworn it will never happen again—no matter how earth-shattering it was. But will a devilish rogue tempt her to risk everything for a chance at true love?

What a romp! This was such a fun read. Charlotte is engaged to a neighbor she has been friends with since she was a child. Billy is as mild and unassuming as Charlotte, and the match seems perfect. Until Kingston shows up.

Charlotte is one of three daughters of a doctor, but when she loses her parents, Billy’s parents forbid the marriage. When her eldest sister marries a Duke, raising their status considerably, the engagement is back on. His parents are awful, but Charlotte and Billy have agreed to live in the house she grew up in, on the other side of town from his parents, so she thinks it will all work out.

Charlotte suffers every month and her youngest sister is a healer/herbalist of sorts. She gives Charlotte a new concoction to try and shortly after falling asleep, awakens in a feverish mood. She staggers down the hall towards her sister’s room but bumps into Kingston, the Duke’s stepbrother who has come to visit. Charlotte basically assaults him, and things get crazy from there.

Kingston has been a rogue for most of his adult life. But watching his mother die a slow and painful death from the pox has forced him to rethink his life, and he’s been celibate for over a year. But he cannot resist Charlotte, so demure by day and so passionate by night.

This was a really fun escape, with some drama, lots of laughs, and some torrid sex. Another terrific addition to a wonderful series.

This entry was posted on Saturday, May 16th, 2020 at 8:00 AM and is filed under Book Reviews, Fiction, Romance. You can follow any responses to this entry through the RSS 2.0 feed. Both comments and pings are currently closed.