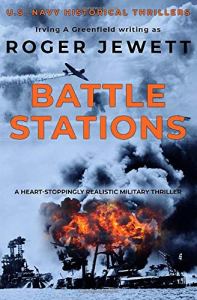 Lives are changed forever in the aftermath of Pearl Harbor…

Andrew Troost, heir to generations of naval tradition, has just been made admiral, when reports fly in of the attack on Pearl Harbor.

Troost’s son, Warren, has followed in his footsteps and is one of the men fighting for his country on a PT boat in the Pacific.

In New York City, Tony Trapasso hears the call to action and gets ready to join the naval action.

With him is Jacob Miller, a young man choosing to become a naval pilot instead of following the rabbinical calling of his Jewish forebears.

They meet Glen Lascomb, a fresh-faced youth, raised on an Iowa farm, who is about to be catapulted into a sea of flaming oil in the Leyte Gulf…

BATTLE STATIONS is the first military action and adventure story in the US Navy Historical Thriller series: a heart-pounding international Second World War thriller, encompassing major battles such as Midway and Okinawa.

The author undoubtedly did a good amount of personal interviews with surviving veterans of World War II in order to come out with the very satisfying book that he did just have published. Jewett concentrates on the U.S.Navy and selected fictional characters serving there in order to tell the story of events that occurred during the war.

He begins the novel a little before the outbreak of hostilities for the U.S.  Andrew Troost, a captain in the U.S. Navy, is seconded as liaison with the British Navy prior to his country entering the war.  Troost is aboard a ship moving to become one of the escort vessels for a fleet of tankers and cargo ships sailing to deliver their cargos to an England at war. He experiences the ship that he is on being torpedoed and sunk. He and one other sailor are the only ones surviving the attack.

Returning to duty, Troost is reassigned to an American ship just in time to go through the attack on Pearl Harbor and that begins the story featuring the US Navy and its place in the war in the Pacific.  Other characters introduced include the son of Andrew Troost starting his own career in the navy. At the same time, Andrew Troost is promoted to Rear Admiral.

The son of a gangster in New York City refuses to allow family influence to keep him out of combat. There is the son of a Jewish Rabbi whose family envisioned him becoming a Rabbi and studying for that. He becomes a Naval aviator and finds that he loves flying. Another individual was raised on a farm in Iowa. With them are the women that also take part in the war, either as actual combatants or as lovers of the men described.

Roger Jewett blends all the personnel he has created and made a very powerful story about war and the real effect on the people that take part in it.  No one leaves a war the same as when they enter it.  Jewett does an excellent job of logically bringing this change in all the characters in front of his readers.  We all understand that someone placed in a position of kill or be killed can never emerge from this experience without complete change, and the author does an excellent job of bringing this out.

The novel ends near the final stage of WWII as the U.S. is waiting to invade Okinawa. This may mean that another novel is planned, moving through the last days of the war and possibly touching on the return of the combatants described to civilian life. In any situation that means another Roger Jewett book; I will head the line to pick it up and enjoy it.

This entry was posted on Tuesday, May 12th, 2020 at 8:00 AM and is filed under Book Reviews, Fiction. You can follow any responses to this entry through the RSS 2.0 feed. Both comments and pings are currently closed.