THE SWEENEY SISTERS by Lian Dolan 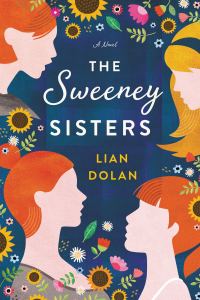 An accomplished storyteller returns with her biggest, boldest, most entertaining novel yet—a hilarious, heartfelt story about books, love, sisterhood, and the surprises we discover in our DNA that combines the wit of Jonathan Tropper with the heart of Susan Wiggs.

Maggie, Eliza, and Tricia Sweeney grew up as a happy threesome in the idyllic seaside town of Southport, Connecticut. But their mother’s death from cancer fifteen years ago tarnished their golden-hued memories, and the sisters drifted apart. Their one touchstone is their father, Bill Sweeney, an internationally famous literary lion and college professor universally adored by critics, publishers, and book lovers. When Bill dies unexpectedly one cool June night, his shell-shocked daughters return to their childhood home. They aren’t quite sure what the future holds without their larger-than-life father, but they do know how to throw an Irish wake to honor a man of his stature.

But as guests pay their respects and reminisce, one stranger, emboldened by whiskey, has crashed the party. It turns out that she too is a Sweeney sister.

When Washington, DC based journalist Serena Tucker had her DNA tested on a whim a few weeks earlier, she learned she had a 50% genetic match with a childhood neighbor—Maggie Sweeney of Southport, Connecticut. It seems Serena’s chilly WASP mother, Birdie, had a history with Bill Sweeney—one that has remained totally secret until now.

Once the shock wears off, questions abound. What does this mean for William’s literary legacy? Where is the unfinished memoir he’s stashed away, and what will it reveal? And how will a fourth Sweeney sister—a blond among redheads—fit into their story?

By turns revealing, insightful, and uproarious, The Sweeney Sisters is equal parts cautionary tale and celebration—a festive and heartfelt look at what truly makes a family.

The Sweeney sisters’ lives revolve around their father, William Sweeney, a much-heralded literary lion. When he suddenly passes away, the sisters gather at the old homestead. Liza, the eldest, lives nearby with her boring husband and runs a successful art gallery that showcases some of her middle sister, Maggie’s work. Maggie is a free spirit who has had trouble with adulting. The youngest Sweeney, Tricia, is a fiercely competitive New York City lawyer.

The girls gather for the reading of the will, and they learn that due to one of those ubiquitous home DNA tests, there is another Sweeney sister, a half-sister. William’s publisher is threatening to sue over an overdue memoir; the sisters are tearing the house apart to find it while simultaneously trying to process their newest family member, their parent’s marriage, and all their other problems, with a lot of love and laughter.

Verdict: It’s been a while since Dolan’s last novel, Elizabeth the First Wife, and it was worth the wait for this humorous, heartfelt family story. Should appeal to fans of Elin Hilderbrand and Elizabeth Berg.

This entry was posted on Tuesday, April 28th, 2020 at 8:00 AM and is filed under Book Reviews, Fiction, Women's Fiction. You can follow any responses to this entry through the RSS 2.0 feed. Both comments and pings are currently closed.