WALK THE WIRE by David Baldacci 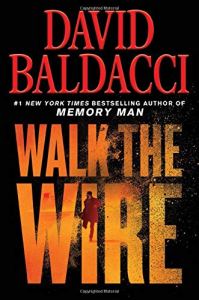 When Amos Decker and his FBI colleague Alex Jamison are called to London, North Dakota, they instantly sense that the thriving fracking town is ripe for trouble. The promise of a second gold rush has attracted an onslaught of newcomers all hoping for a windfall, and the community is growing faster than houses can be built. The sudden boom has also brought a slew of problems with it, including drugs, property crimes, prostitution — and now murder.

Decker and Jamison are ordered to investigate the death of a young woman named Irene Cramer, whose body was expertly autopsied and then dumped in the open — which is only the beginning of the oddities surrounding the case. As Decker and Jamison dig into Irene’s life, they are shocked to discover that the woman who walked the streets by night as a prostitute was a teacher for a local religious sect by day — a sect operating on land once owned by a mysterious government facility that looms over the entire community.

London is a town replete with ruthless business owners, shady government officials, and religious outsiders, all determined to keep their secrets from coming out. When other murders occur, Decker will need all of his extraordinary memory and detective skills, and the assistance of a surprising ally, to root out a killer and the forces behind Cramer’s death. . . before the boom town explodes.

David Baldacci has many positive qualities in his profession as a novel writer. Possibly the most outstanding of these is his ability to create a wide variety of characters for his books and make them come alive. He has the knack to hold onto the various natures assigned and keep them reacting in the unique manner such types would always exhibit.

“Walk the Wire” brings together two different sets of the characters created. The first group involves Amos Decker and his partner Alex Jamison. Decker is a huge bear of a man; tall and weighing close to 300 pounds. He began a career as a pro football player but was injured in a practice. Physically knocked into a coma he finally came to and found that he had somehow gained a photographic memory as well as distorted views of various colors. He uses his unusual skills to advantage in his job as an FBI agent.

The other set of characters are Will Robie and Jessica Reel. They both are professional assassins employed by the U.S. government and very skillful in their work. One of the novels featuring Will and Jessica had them meet when each was in receipt of an order to kill the other. Great way to start a relationship, right?

Amos and Alex are sent to the town of London, North Dakota to investigate a murder. London is at the center of the oil drilling industry known as fracking and due to the boom this industry has created is very much in the wild character of Alaskan towns during the gold rush of the 19th century. A young woman was killed and then literally autopsied and left in an open field with her entrails outside the body. It appeared that whoever did the job knew how to do an autopsy. While horrible in its aspect, Amos wonders why two FBI agents were assigned to look into the killing when it should have really fallen into the jurisdiction of the local police.

Trust Baldacci to supply some fascinating answers. He incorporates the arrival of Robie and Reel with the existence of an air force base watching for missiles launched by enemies of the U.S., the private preserve of a cult, and two wealthy individuals fighting for more and more property in the boomtown. More murders with a slew of suspects and the other factors mentioned create the typical David Baldacci book one fine all-nighter, and of course, a five-star novel.

This entry was posted on Friday, April 24th, 2020 at 8:00 AM and is filed under Book Reviews, Crime Fiction, Fiction. You can follow any responses to this entry through the RSS 2.0 feed. Both comments and pings are currently closed.