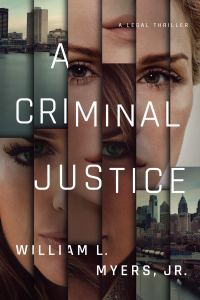 Mick McFarland is stunned when he’s arrested for murdering business tycoon Edwin Hanson, brother to David Hanson—one of Mick’s former clients. Mick is even more shocked when he’s confronted with the incriminating evidence: surveillance footage of him stalking the victim and pulling the trigger.

As Mick’s legal team fights against windmills trying to beat the prosecution in court, his wife, Piper, journeys across the country, trying to win her husband’s freedom by going after the man she is convinced is out to destroy Mick and David both. What she doesn’t anticipate is that David’s wife, Marcie, is on a similar mission to shelter her own husband. And the two women may not be on the same side.

Piper has it all right…and all wrong. And her time is running out. Will she be able to save her husband from conviction and clear his name?

William Myers sets up a well done and complete novel touching upon the jury trial of a man facing murder charges, the love of his family, the loyalty of an individual’s coworkers and a fascinating look at the incredible future of computers and computing.

Mick McFarland is an attorney just coming off an important case when he is arrested for murder. Astonished, he is faced with actual video of him walking in front of an individual and then clearly walking back and shooting that man to death. The proof of the crime seems irrefutable; it is shown in a video taken by surveillance cameras with dated impression data and no question of the time is that of the murder.

Going to trial Mick is represented by another lawyer from his own firm. But the evidence brought by the District Attorney filing the case against Mick just continues to pile up with no way open to contest the adverse testimony.

Mick’s wife Piper finally must take it upon herself to go after the party that may have committed the murder and placed the blame on her husband. The final section of the novel is a must-read and involves an explanation of what looks like the future of computing. Some of the technique coming out in the book is available in applications in today’s digital world and the author describes an end product currently available in some areas which are well on their way to making our world a much different place than we think.

A mesmerizing novel that will grab the reader’s attention and open doors that are unheard of by most people. The book is beyond being an all-nighter and could very well be the first written description of a wonderful, but perhaps frightening world opening now.

This entry was posted on Monday, March 23rd, 2020 at 10:34 AM and is filed under Book Reviews, Crime Fiction, Fiction. You can follow any responses to this entry through the RSS 2.0 feed. You can leave a response, or trackback from your own site.