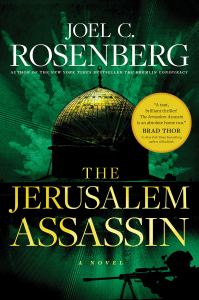 The enemy is invisible and moving fast. The body count is rising. And time is running out.
Marcus Ryker has spent his entire career studying killers. One thing he knows for sure: a peace summit is the ultimate stage for an assassination.

President Andrew Clarke is determined to announce his historic peace plan from the Temple Mount in Jerusalem. But when senior American officials who support the plan begin violently dying, Clarke orders Ryker and his team of CIA operatives to hunt down those responsible and bring the killing spree to an end.

When the Palestinians denounce the American plan, the Saudis signal they may be ready to forge a historic treaty with Israel. Could the Saudi king’s support be the missing ingredient that will lead to peace at long last?

Ryker soon uncovers a chilling plot to kill the American president. A well-resourced international alliance is dead set against the peace plan. They will stop at nothing to strike a blow against the Americans and seize leadership of the Muslim world.

With all eyes on Jerusalem and the president in the crosshairs, it’s up to Ryker to eliminate the terrible evil that’s been set in motion. The fate of the region depends on his success. He has 48 hours.

Rosenberg is the author of many books most of which deal with the situation currently prevalent in the Middle East. He has established a reputation as a man whose writings echo the reality of what is happening in that area of the world and whose opinions are sought by many leaders involved in finding their way in the tumult of that region.

The Jerusalem Assassin is a novel that focuses on the interest of the president of the United States in fostering a peace between the Arab nations and Israel. He intends to travel to Jerusalem and set up a meeting between himself, the President of Israel and the ruler of Saudi Arabia. The accord reached by the three leaders is seen to also bring peace between the Palestinians and Israel between whom years of negotiation have not yielded any advances.

A new terrorist group formed in Greece is opposed to such a meeting and commences assassinating Americans sent as an advance group to lay the groundwork for the talks. The US president sends Marcus Ryker and a supporting team of CIA operatives to stop the assassinations and bring the killers to justice.

The work of Ryker and his team in moving the talks forward is handled with a style that creates an impossibility for the reader to lay down the book before finishing it. It is action and more action, but logically handled as the time for the talks to start looms closer and closer with the Terrorist group moving their agenda forward as well. At the same time, Rosenberg keeps the terror state of Iran front and center certainly setting the stage for continuous action for Marcus Ryker in forthcoming novels. I’m certainly looking forward to those when they are published.

This entry was posted on Thursday, March 19th, 2020 at 8:00 AM and is filed under Book Reviews, Crime Fiction, Fiction. You can follow any responses to this entry through the RSS 2.0 feed. Both comments and pings are currently closed.