THE HOLDOUT by Graham Moore 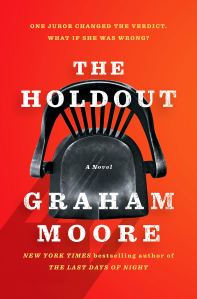 One juror changed the verdict. What if she was wrong? From the Academy Award–winning screenwriter of The Imitation Game and bestselling author of The Last Days of Night. . . .

“Exhilarating . . . a fiendishly slippery game of cat-and-mouse suspense and a provocative, urgent inquiry into American justice (and injustice) in the twenty-first century.”—A. J. Finn, #1 New York Times bestselling author of The Woman in the Window

It’s the most sensational case of the decade. Fifteen-year-old Jessica Silver, heiress to a billion-dollar real estate fortune, vanishes on her way home from school, and her teacher, Bobby Nock, a twenty-five-year-old African American man, is the prime suspect. The subsequent trial taps straight into America’s most pressing preoccupations: race, class, sex, law enforcement, and the lurid sins of the rich and famous. It’s an open-and-shut case for the prosecution, and a quick conviction seems all but guaranteed—until Maya Seale, a young woman on the jury, convinced of Nock’s innocence, persuades the rest of the jurors to return the verdict of not guilty, a controversial decision that will change all their lives forever.

Flash forward ten years. A true-crime docuseries reassembles the jury, with particular focus on Maya, now a defense attorney herself. When one of the jurors is found dead in Maya’s hotel room, all evidence points to her as the killer. Now, she must prove her own innocence—by getting to the bottom of a case that is far from closed.

As the present-day murder investigation weaves together with the story of what really happened during their deliberation, told by each of the jurors in turn, the secrets they have all been keeping threaten to come out—with drastic consequences for all involved.

Maya Seale is a rapidly rising attorney working for a top legal firm. We meet her as she concludes a case that involves proving that a killing by her client was, in reality, Justifiable Homicide. Her actions sum up her attitude towards the law. She evolved her leanings after serving as a juror on a murder trial ten years before the beginning of the novel. At that time an African American substitute teacher was accused of killing Jessica Silver, a girl in his class with whom he had been having an affair. The case was brought to trial with public opinion heavily on the side of convicting Bobby Nock, the man in question. When the trial concluded and the jury began its deliberations, eleven of the twelve voted quickly to find Bobby guilty. It was Maya that fought to acquit the accused and eventually convinced the others to change their votes. While serving on the jury Maya had had an affair with one of her fellow jurors. An affair that looked like it was leading to marriage but ended when the two disagreed on the outcome.

Fast forward ten years when one of the jurors on the Bobby Nock case sent notes around suggesting a 10-year reunion. The case had been so dominant in the country and the jurors’ lives that the idea of a reunion found all in agreement. On the first day at the meeting hotel, Maya got together with her lover from the jury that she hadn’t seen in 10 years. They met in her room, but Maya needed a break from the raw emotion involved in seeing him again and went outside walking around for a while. When she returned she found that the man had been killed by a blunt force blow to his head. Maya is suspected of the murder while the ensuing events open up vivid memories of the Nock trial and the fact that no killer had ever been caught.

The plot, the writing, and the descriptions flow onto the pages of the book dragging the reader into an extraordinarily vivid story. Moore’s views are apparent, issuing from the talks of the participants in the novel. His views are that simply put, the present American justice system is flawed; both stacked against the poor and favoring the rich. The opinion is there, but beyond that is an exceptionally well done novel that will certainly draw all to looking for Graham Moore’s future writings.

This entry was posted on Wednesday, February 19th, 2020 at 8:00 AM and is filed under Book Reviews, Crime Fiction, Fiction. You can follow any responses to this entry through the RSS 2.0 feed. Both comments and pings are currently closed.