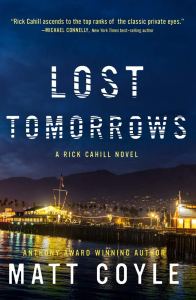 Rick Cahill, who is Matt Coyle’s answer to Sam Spade and his brethren, as a hard-boiled, take no prisoners detective makes his sixth appearance in this novel.

Rick started out life as a member of the Santa Barbara, California police department and married Colleen, the woman he was in love with. Tragedy struck when Colleen was murdered and her body thrown on a beach with all marks burnt off her body. Rick was accused of being the killer, but released by the police when an alibi cleared him.

In the years since the murder, Colleen’s killer was never caught and unfortunately, popular opinion thought of Rick as the guilty party. He lost his job with the police and over time became a private detective during the years after the murder.

In this book, Rick has mentally sunk down far enough to just look for easy work as a process server. At a point where he has reached his lowest point, he receives a phone call from Leah Landingham who the sister of Krista who was Rick’s first partner when he joined the Santa Barbara police department. Leah gives him the bad news that Krista has been killed by a hit and run driver in the middle of the night at a location she should not have been in. Reluctantly, Rick goes to Krista’s funeral where Leah gets him to investigate her sister’s death since it did not look like any accident.

Rick accepts the assignment and falls into not only Krista’s death, but also the possibility that Colleen’s death is somewhat connected. The investigation brings to bear all of Matt Coyle’s ability to tell a fascinating story that just grabs the reader and forces him or her to continue reading until done. Each of the Rick Cahill books does stand on its own with only a few sentence recapitulation of the past events. This one is the same; mesmerizing and very well done.

This entry was posted on Thursday, December 5th, 2019 at 8:00 AM and is filed under Book Reviews, Crime Fiction, Fiction. You can follow any responses to this entry through the RSS 2.0 feed. Both comments and pings are currently closed.