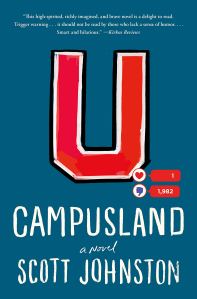 Johnson offers his first published book and it is a delightful satire of the evolution of the “political correctness” movement currently wracking havoc in the United States and probably in other countries as well.

The action takes place over one academic year at Devon University, a huge college level institution catering to a group of elite students. These scholars are depicted through the eyes of Eph Russell, a newly hired professor of English who is currently awaiting being granted tenure at the school.

Eph finds himself in hot water when his discussion of Mark Twain’s great novel “Huckleberry Finn” runs into criticism from various student groups. Four letter words are utilized in that book which offends many students. Other factors offending more students are taken into account by the University directors and the book is banned at the school. Eph receives a reprimand but continues on.

Lulu Harris is a newly enrolled coed arriving via her father’s pressure. She is a first year student (the term freshman cannot be used or it could offend the students.) Her sole ambition is to become a prominent socialite and in spite of being accepted at one of the most desired institutions of higher learning in the country, works at the society lady aspect neglecting studies. As fate would have it, she ends up in one of Eph’s classes and begins a campaign of sending him e-mails requesting a meeting in order to discuss her grades. He refuses to see her until one day she suddenly appears at his office, begins to flirt with him, and accidentally lands on top of him delivering a kiss.

Weeks later Lulu’s position on campus changes based on circumstances arising and she morphs into a militant feminist. It is at this point that she is convinced to accuse Eph of attempted rape. This results in poor Dr. Russell being charged by the university and brought up for a hearing under regulations which do not allow him to question Lulu nor even obtain a copy of her statement. He is placed on a year’s probation, but after the fact that Lulu had recanted her charge, but that was never brought up at his hearing.

The novel is done as a parody of what has happened due to the advent and promotion of “political correctness”. While it is set on a college campus and Johnson indicates in the afterward that is what he is pointing his finger at, the situations can certainly be applied in general. The absurdity of some of the ideas and actions are definitely visible in other venues – politics, business etc.

I did laugh at many descriptions of both the characters and the actions depicted, but I do appreciate that the circumstances described are a serious problem and deserve attention before they choke us.

This entry was posted on Wednesday, August 14th, 2019 at 8:00 AM and is filed under Book Reviews, Fiction. You can follow any responses to this entry through the RSS 2.0 feed. Both comments and pings are currently closed.