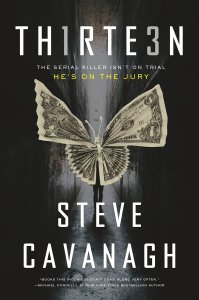 Wow – that’s the one word I must use in describing Cavanaugh’s novel featuring former con man and huckster turned defense attorney Eddy Flynn. The novel is a wonderful romp through a murder trial and of course it had to be finished in one sitting (only one cup of coffee though – have to watch the caffeine so I can sleep until Cavanaugh’s next book is published.

Bobby Solomon, a first tier screen actor is accused of killing both his wife, who is his normal co=star, and his agent who were supposedly caught by him in bed together. The star is indicted and is put on trial for murder. Eddy is called upon by the firm handling Bobby’s defense to help them as needed via discrediting testimony by the police officers involved in the arrest. Needing a job Eddy signs on, but due to a change in circumstances finds himself handing the total defense. He hires a former FBI agent to help him with investigations necessary to work the case properly. The lady proves quite capable in working all angles necessary to aid in the defense. She is also introduced as a possible romantic interest in the future since Eddy’s current wife is in the process of divorcing him.

Cavanagh skillfully takes us through the events involved in the trial, starting with picking a jury and moving forward from there. Eddy is shown as human – he does not come up with brilliant one time off the cuff ideas. He has his doubts but continues to work the case as well as he is able. His logical approach turns up one startling factor that becomes the most important aspect of the case. The real killer is not only in court to watch the proceedings; he is actually one of the twelve jurors and in the most advantageous position to influence the verdict.

The rating system we are accustomed to in reviewing a book involves stars – five for best. I really think that that total is not enough. The reader will judge the book, undoubtedly have one or two cups of coffee and relish a superb reading experience and like myself will eagerly await Steve Cavanagh’s future novels.

This entry was posted on Tuesday, August 13th, 2019 at 8:00 AM and is filed under Book Reviews, Crime Fiction, Fiction. You can follow any responses to this entry through the RSS 2.0 feed. Both comments and pings are currently closed.