THE KOREAN WOMAN by John Altman 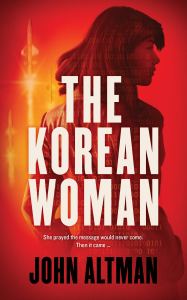 Altman presents an extremely well planned and written novel about a sleeper spy living in the United States on behalf of the regime of North Korea.

The stark difference in ideas and life between the two countries has never been better presented than in this book. Song Sun Young was born in North Korea. She grew up in an environment of repression, semi-starvation and with even the slightest deviation from proscribed activity, punishment by death. In spite of this, Song has tried several times to escape along with her brother to South Korea. The last attempt meets with capture, but instead of executing her the government recognizes her intelligence and initiates a program to prepare her to become a mole; i.e. a sleeper agent in the United States.

Fast forwarding from her insertion into the U.S., Song is married to an American whom she loves and two children with him that are her pride and joy. But after seven years of this happy life she is called by North Korea to start the work she was trained for. Song’s brother has been held over her head with the threat that if she does not do as required he will be killed and she has no choice but to follow orders.

Song is not aware that the CIA knows of her and follows her as she moves forward with her mission for North Korea. Working with the CIA is Dalia Artzi a retired Israeli operative that Altman has used in other novels. The reader follows the counter actions of the CIA through the thinking of Dalia while working with them.

The culmination of the novel is a crisis that may lead to very unforeseen consequences and if you haven’t slept while reading the first part, what is happening will keep your eyelids open even wider. A very well done and well plotted adventure into international politics and conflict between nations.

This entry was posted on Thursday, April 11th, 2019 at 6:00 AM and is filed under Book Reviews, Crime Fiction, Fiction. You can follow any responses to this entry through the RSS 2.0 feed. Both comments and pings are currently closed.