THIS SCOT OF MINE by Sophie Jordan 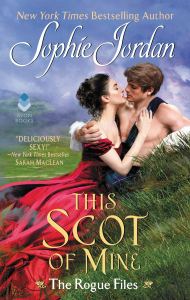 Desperate to escape her vile fiancé, Lady Clara devises a bold lie—that she’s pregnant with another man’s child. With her reputation in tatters, Clara flees to Scotland to live out her days in disgrace, resigned to her fate as a spinster…until she claps eyes on the powerful and wickedly handsome Laird Hunt MacLarin.

She’s the answer to his curse…

Laird of an ancient clan, Hunt needs an heir, but he comes from a long line of men cursed to die before the birth of their firstborn. When the Duke of Autenberry approaches him with a proposition—marry my ruined sister—it seems the perfect solution. Even better, the defiant lass stirs him to his very soul.

No escaping the truth…

Except marriage cannot set them free. No matter how much Hunt desires her. No matter how much Clara burns for him. Soon she is falling for her husband, but is love enough to end the curse? Or is the tragic history of the MacLarin Clan doomed to repeat itself?

May all future lairds of Clan MacLarin live out their days knowing they are marked to love, but not to live. Until a laird of this line lives to see his first-born draw breath, this curse shall never be broken.

Clara is the daughter and brother of a duke. But when she is ruined in London, she is sent to live with her brother in Scotland. Everyone believes her lie and assumes that she is pregnant. Hunt happily acquiesces to the Duke and is happy to marry her and raise her child as his own, thus working around the curse and hopefully living a long life. Until the morning after the wedding night when he finds out about the lie.

Feeling that he is doomed, he tries to stay away from Clara but the attraction between them is sizzling hot. So is the sex in this book, for that matter. So despite his grandmother’s dire warnings and his own feeling of dread, Hunt and Clara find a way to their happily ever after.

No spoilers here, I’ll just say I couldn’t turn the pages fast enough and thoroughly enjoyed this latest entry into one of my favorite series. I don’t think they need to be read in order, but in case you want to, here you go:

1. While the duke was sleeping
2. The scandal of it all
3. The duke buys a bride

This entry was posted on Wednesday, April 10th, 2019 at 6:00 AM and is filed under Book Reviews, Fiction, Romance. You can follow any responses to this entry through the RSS 2.0 feed. Both comments and pings are currently closed.