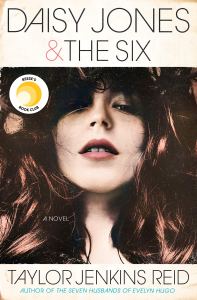 A gripping novel about the whirlwind rise of an iconic 1970s rock group and their beautiful lead singer, revealing the mystery behind their infamous breakup.

“I devoured Daisy Jones & The Six in a day, falling head over heels for it. Daisy and the band captured my heart.”—Reese Witherspoon (Reese’s Book Club x Hello Sunshine book pick)

Everyone knows DAISY JONES & THE SIX, but nobody knows the reason behind their split at the absolute height of their popularity . . . until now.

Daisy is a girl coming of age in L.A. in the late sixties, sneaking into clubs on the Sunset Strip, sleeping with rock stars, and dreaming of singing at the Whisky a Go Go. The sex and drugs are thrilling, but it’s the rock ’n’ roll she loves most. By the time she’s twenty, her voice is getting noticed, and she has the kind of heedless beauty that makes people do crazy things.

Also getting noticed is The Six, a band led by the brooding Billy Dunne. On the eve of their first tour, his girlfriend Camila finds out she’s pregnant, and with the pressure of impending fatherhood and fame, Billy goes a little wild on the road.

Daisy and Billy cross paths when a producer realizes that the key to supercharged success is to put the two together. What happens next will become the stuff of legend.

The making of that legend is chronicled in this riveting and unforgettable novel, written as an oral history of one of the biggest bands of the seventies. Taylor Jenkins Reid is a talented writer who takes her work to a new level with Daisy Jones & The Six, brilliantly capturing a place and time in an utterly distinctive voice.

This was a fun and nostalgic read for me. I kept thinking it must be loosely based on real people but I couldn’t figure that out. I grew up in roughly the same time line as this book and sex, drugs and rock ‘n roll was no joke and all of that abounds in this book. It is more or less a coming of age story for Daisy mostly, but is more about relationships. I really liked that the surprise ending a lot but no spoilers here other than to say I didn’t see it coming. Oh, the addendum of all the song lyrics was a nice touch.

The format of the book, for lack of a better word, is interview style. An oral history of sorts. Each character is quoted in response to questions, but we don’t know who is asking the questions or why until the end. So it reads in basically multiple first person, an interesting technique. It’s also a fast read, especially as I got deeper and deeper into it. It is a very compelling story and I really loved it! I can totally understand all the praise this unique book is getting. Highly recommended – and should be great for book groups.

This entry was posted on Saturday, March 30th, 2019 at 6:00 AM and is filed under Book Reviews, Fiction, Women's Fiction. You can follow any responses to this entry through the RSS 2.0 feed. Both comments and pings are currently closed.

3 Responses to DAISY JONES & THE SIX by Taylor Jenkins Reid