IN ANOTHER TIME by Jillian Cantor 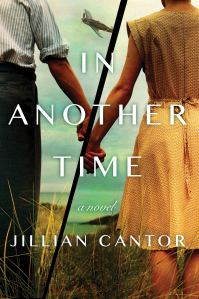 The action occurs in Germany, England, France, Austria and the United States. And the star crossed lovers are Hannah Ginsberg and Max Beissinger, both born in Germany. Max has inherited his father’s bookshop and enough money to be able to maintain a modest style of living while Hannah is a brilliant violin student with the inherent talent to become a major artist in the world of classical music. The book takes Max and Hannah from first meetings, through falling in love. It also begins in the period when Adolf Hitler rose to power and transformed Germany into a dictatorship with the mandate to expand via military conquest.

The stage is set; the action begins. First; Hannah is Jewish, Max is not and Hannah’s family finds it impossible to accept a union between the two. Second, Germany under the increasing power of the Nazi party begins to practice prejudice as national policy against several ethnic groups; among them: Jews. This beginning and also world events are unerringly the factors that guide the now and future actions of each of the couple.

Cantor utilizes alternating narratives by each of the principal characters in order to depict events in both the period involving Hitler’s rise and the time just after the end of World War II hostilities. This styling allows an excellent description of the emotions and feelings of Max and Hannah as well as descriptions of the events that occur. There is also a use of a concept of a wormhole (Black Space Hole) as a means of accelerated travel around the universe that had been discussed by Albert Einstein as well as having a place in many Science Fiction novels. What it does and how it affects Hannah and Max provides an interesting aspect and possibility for them is an important addition to events.

The novel and the styling used by the author insure an emotional appeal to the reader. The book must be finished in one sitting! It is impossible to put it down before finding out what happens to Max and Hannah; people who have become friends to those that read the book. An extremely well done work and one that will not leave memory for a long time.

This entry was posted on Friday, March 29th, 2019 at 6:00 AM and is filed under Book Reviews, Fiction. You can follow any responses to this entry through the RSS 2.0 feed. Both comments and pings are currently closed.