THE WANDERER by Robyn Carr 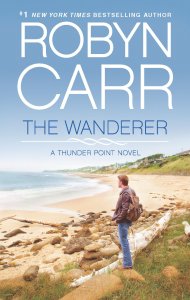 Nestled on the Oregon coast is a small town of rocky beaches and rugged charm. Locals love the land’s unspoiled beauty. Developers see it as a potential gold mine. When newcomer Hank Cooper learns he’s been left an old friend’s entire beachfront property, he finds himself with a community’s destiny in his hands.

Cooper has never been a man to settle in one place, and Thunder Point was supposed to be just another quick stop. But Cooper finds himself getting involved with the town. And with Sarah Dupre, a woman as complicated as she is beautiful.

With the whole town watching for his next move, Cooper has to choose between his old life and a place full of new possibilities. A place that just might be home.

I’ve read several Robyn Carr books, including the entire Virgin River series, most if not all of Sullivan’s Crossing and Grace Valley. I was in the mood for another series so I picked up The Wanderer, the first book in the Thunder Point series. All of these series are loosely tied together so starting a new one actually feels like going home again. I love the world Carr creates and I really love spending time with her characters. My only complaint is the sex is all the same in every book with every character, all the women have heart shaped kissable lips and well, you get the idea. But it is a minor complaint and really, I wouldn’t keep going back to her books if it truly bothered me.

There are two romances going on in this first book. Cooper and Sarah are the main story. The town cop. Mac, and his best friend, Gina, are the subplot romance. There is also a bit of a mystery here. Coop shows up in Thunder Point because his friend Ben has died, supposedly from a fall down the cellar stairs. But Coop wants to check things out himself. If you’ve read the Virgin River books, then these names should sound familiar – Luke, Ben and Coop are old friends.

The small town of Thunder Point is on the Oregon coast. Because this is the first book of a new series, it is a bit slow to build. There are lots of descriptions of the area and the people who live in this small town. and the descriptions make me want to check it out! If only it was real. Oh well, at least I can visit there through the nine books in this series. Moving on to The Newcomer, book number two. Stay tuned!

This entry was posted on Saturday, March 9th, 2019 at 6:00 AM and is filed under Book Reviews, Fiction, Romance. You can follow any responses to this entry through the RSS 2.0 feed. Both comments and pings are currently closed.

One Response to THE WANDERER by Robyn Carr