THE GIRL IN THE GLASS BOX by James Grippando 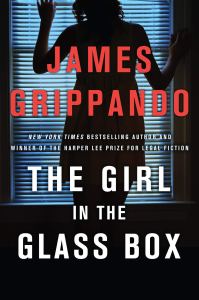 This, the latest novel featuring Jack Swyteck, Grippando’s practicing attorney, was written during a period that saw a law enforcement agency of the United States, U.S Immigration and Customs Enforcement (better known as ICE) being subjected to a huge amount of criticism by a portion of the American population. The agency was demonized by its critics as riding roughshod over the immigrants that it had to apprehend, detain, jail and/or deport from the country. The leading critique was that it separated children traveling with their parents as they attempted to enter the United States illegally. In my opinion, adherents of the agency were quick to point out that ICE was simply carrying out their assigned function in attempting to keep out people that did break the law by not complying with the legalities of legal entrance.

Grippando, through Jack Swyteck, makes his opinion very clear in setting up ICE as being over zealous in their administration of their duties. His beloved abuela (grandmother) pushes him into the defense of an illegal alien woman and her daughter. Julia Rodriguez and her daughter Beatriz are illegals that have found a small place in society and are trying to make a life for themselves when Julia is sexually attacked by her boss at the coffee shop where she works. She defends herself but then finds herself detained by ICE after an anonymous tip, locked in prison and set up for deportation. Beatriz stays with an aunt that has completed immigration requirements earlier and is a U.S. citizen.

The novel is replete with the sordid conditions experienced by Julia, the pressure by ICE on the judge supervising the trial that Swyteck requests to present her case for political asylum, and the changes in her daughter when her seemingly happy life is broken up by her mother’s problems. Grippando’s opinions are open and clear. This does not change the fact that the book is the author’s usual well done and engrossing story which can be read as another fine reading experience. The novel reaches an ending which seems to clearly be the beginnings of another book continuing the story. Again, despite this reader’s opinion about ICE and its described methods, this read is a pleasure of an all nighter by an author that is at the height of his literary skill.

This entry was posted on Saturday, February 9th, 2019 at 6:00 AM and is filed under Book Reviews, Crime Fiction, Fiction. You can follow any responses to this entry through the RSS 2.0 feed. Both comments and pings are currently closed.