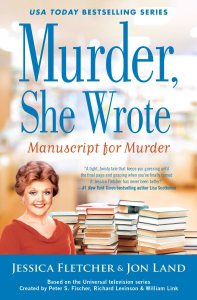 I am thrilled to welcome Jon Land to the blog! And don’t forget that you can win a signed copy of Murder She Wrote: Manuscript for Murder. Just head over to the Win Books page for all the details.

To celebrate the publication of MANUSCRIPT FOR MURDER, my SECOND effort writing as Jessica Fletcher in the MURDER, SHE WROTE series, I thought I’d put together my Top Ten list of the most influential crime/mystery shows in television history.

THE UNTOUCHABLES: Fans will remember Robert Stack’s brilliant turn as Elliot Ness, the Walter Winchell narration, and that great Nelson Riddle instrumental theme song. What gets forgotten is that this was the show that defined cops and robbers tales for years to come. Often imitated, but never equaled, Ness and company’s battle with underworld Chicago in the days of Al Capone and Frank Nitty played out week after week in hardboiled and violent fashion.

HILL STREET BLUES: One of the shows that changed television forever, upping the ante across the board as far as writing, plotting and characterization. The late Steven Bochco’s ensemble cast battle bad guys, their worst tendencies, and each other while going about their daily jobs fighting crime. Many of the great crime shows that dominate the cable airwaves owe a huge debt to Blues, which more than any other show at the time brought moral ambiguity to the small screen.

COLUMBO:  What can I say about the rumpled detective famously played by Peter Falk that basically redefined the television mystery? It wasn’t a whodunit so much as how’s-he-solve-it, and Columbo never disappointed. The series invited the audience to play along, searching for the elusive prime clue to be revealed only in the final moment. Episodes ran in various forms for an astounding 30+ years. In not a single one did Columbo ever draw his gun or lose his zeal. Still one of the smartest and best-written shows in television history.

MURDER, SHE WROTE:  Okay, I’m a little prejudiced but this fabulously successful television show starring Angela Lansbury in the title role ran for a dozen years, all but one of them among the top ten rated shows, spawned four TV movies, and is still enjoying a successful run in syndication on Hallmark Mysteries. The notion of an amateur sleuth spawned a slew of imitators that never achieved this level of success or resonated as much or as long in pop culture. It’s safe to say that Jessica Fletcher is America’s premier sleuth with a near 100% name recognition value.

THE ROCKFORD FILES:  The clever answering machine staple opening alerted us from the start of every episode that we were in for a detective tale of fresh ilk. Its light tone, crack ensemble, recurring cast and James Garner’s star turn in the lead role made it must-see TV before anyone had officially coined the term. Garner’s deadpan delivery defined a show that took itself just seriously enough. I can’t remember a single plot-line; all I remember is how much I loved the show.

LAW AND ORDER:  Take your pick as to which one. SVU is still on the air and the original faded out only after a 20+ year run. The series breathed new life into a then moribund TV genre by reinventing the form and managing to survive a slew of cast changes. Such changes had doomed the likes of Route 66, but creator Dick Wolf’s genre-bending format rendered cast members basically interchangeable. Every week, Law and Order did and does deliver on its promise, touching on front-page topics in never letting us down.

CSI: Again, take your pick, but for me the early years of CSI: Las Vegas, starring the great William Petersen similarly helped redefine the television crime genre. Entire episodes would go by without a single gunfight, the action that demanded and commanded our attention limited at times to the claustrophobic confines of police labs where the contents of microscope slides spurred the biggest reveals. Each episode is basically a puzzle waiting to be assembled. We often know, at least suspect, who the killer is, the fun lying in the process used to catch him. Consider CSI the anti-Columbo. The rumbled detective wouldn’t even know how to spell electron spectrograph, while Petersen’s Gil Grissom couldn’t solve a case without one.

NYPD BLUE: Tame by comparison with today’s cable fare, this second Steve Bochco creation nonetheless raised eyebrows everywhere in terms of content ranging from language to sexually-charged subject matter. Yes, it’s known primarily for its salaciousness and being way ahead of its time, but it was also an outstanding police procedural that weathered numerous cast changes in dominating talk around the water cooler for years. Gritty, grungy and morally ambiguous, this is television, and crime drama, at its level best.

PERRY MASON:  Enjoy legal thrillers? They owe their existence to this splendid series of eighty books penned by Earl Stanley Gardner and a television show by the same name starring Raymond Burr in the title role that ran for a decade. The episodes, and the books, continue to hold up and the notion of a sleuthing lawyer and his entourage spawned the likes of John Grisham and Scott Turow, not to mention the slew of lawyer shows that have long been a television programming staple.

MIAMI VICE: One of the true game changers in the history of the airwaves that everyone rushed home to watch when it aired on Friday nights. The show brought both pop music and men’s fashion into the mainstream with musicians and designers alike battling for inclusion from the moment Phil Collins’ “Into the Air Tonight” themed the climactic shootout in the premier. Brandon Tartikoff legendarily based the series on the phrase “MTV cops” he once jotted down on a notepad. True or not, the show brought television into the forefront of pop culture, setting the stage for when the small screen would actually come to define it.

I’m already starting to think of some of the shows I left off this list. How about you? Which would you add?

Murder She Wrote: Manuscript for Murder

Jessica Fletcher has had plenty to worry about over her storied career, both as a bestselling novelist and amateur sleuth. But she never had any reason to worry about her longtime publisher, Lane Barfield, who also happens to be a trusted friend. When mounting evidence of financial malfeasance leads to an FBI investigation of Lane, Jessica can’t believe what she’s reading.

So when Barfield turns up dead, Jessica takes on the task of proving Barfield’s innocence–she can’t fathom someone she’s known and trusted for so long cheating her. Sure enough, Jessica’s lone wolf investigation turns up several oddities and inconsistencies in Barfield’s murder. Jessica knows something is being covered up, but what exactly? The trail she takes to answer that question reveals something far more nefarious afoot, involving shadowy characters from the heights of power in Washington. At the heart of Jessica’s investigation lies a manuscript Barfield had intended to bring out after all other publishers had turned it down. The problem is that manuscript has disappeared, all traces of its submission and very existence having been wiped off the books.

With her own life now in jeopardy, Jessica refuses to back off and sets her sights on learning the contents of that manuscript and what about it may have led to several murders. Every step she takes brings her closer to the truth of what lies in the pages, as well as the person who penned them.

This entry was posted on Tuesday, November 6th, 2018 at 6:00 AM and is filed under Uncategorized. You can follow any responses to this entry through the RSS 2.0 feed. Both comments and pings are currently closed.