TO DIE IN VIENNA by Kevin Wignall 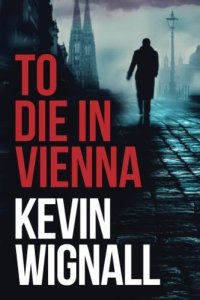 A very neatly done novel about conflict between different spy agencies. Freddie Makin had once been an agent for a super secret group known as S8. He was a survivor of an ambush in Yemen five years ago when three of his fellow agents had been killed when driving towards a rendezvous with suspects wanted by their group. Freddie had been so traumatized by the killing, blaming himself for poor planning that he resigned his position. He than became a spy for hire and the story finds him doing surveillance on Jiang Cheng an academic. After many months of observing Cheng Freddie finds that there really isn’t anything in Cheng’s behavior to warrant the attention given.

Suddenly the situation changes radically. Someone is sent to kill Freddie who fortunately turns the tables on his would be killer. He quickly realizes that it is probably something that he saw in relation to his watching Cheng that has prompted the attempt on his life. The novel than becomes a masterful study of Freddie’s old trade craft returning as he begins unraveling the reason for the attack on himself and on people including Cheng and others. And is it the CIA that is doing the attacking? Freddie is well portrayed as a normal human being prone to being hurt and possibly killed while looking into what is happening to him. Clues are available to the reader and the reason for the attacks is a logical one resulting in a logical finale to the book.

NOTE: Soon to be a major motion picture starring Jake Gyllenhaal. The book certainly has the ingredients to be a good one.

This entry was posted on Saturday, June 16th, 2018 at 6:00 AM and is filed under Book Reviews, Crime Fiction, Fiction, Sci-Fi/Fantasy. You can follow any responses to this entry through the RSS 2.0 feed. Both comments and pings are currently closed.