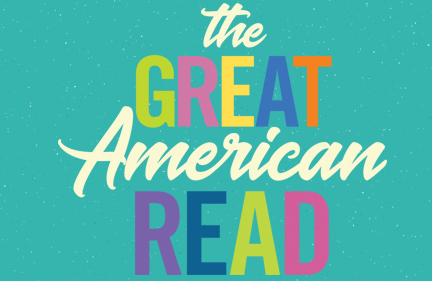 PBS rules! A two-hour television special about books? Who thinks of something like this? Only PBS. Not only a TV special, but several more episodes to follow in the fall.

What’s it all about? America gets to vote on their favorite novel!

A preliminary poll resulted in a list of 100 books. Now you can join an online book club,  share your story about which novel has had the biggest impact on your life and take a quiz to see how many of the 100 you have read (I’ve read 62, not as many as I would have thought!)

Much to my surprise, the list of books is in alphabetical order by title. The librarian in me found that odd, so I searched around and found that you can also sort it by author – except it is by the author’s FIRST name. That is so not helpful! (Obviously, a librarian was not involved in this process.)

So I created my own lists. The entire list alphabetical by author’s last name; then I created other lists breaking out fiction, science fiction & fantasy, young adult, children’s and Spanish. That is how my library does it, but your mileage may vary, etc. For instance, on the PBS special, the host, Meredith Vieira, noted that about 25% of the titles on the list were science fiction or fantasy. At my library, less than 10% are filed that way, most are in Fiction because they are considered classics or they are in Young Adult (like The Hunger Games & the Twilight books.) The Harry Potter books are the only books that straddle two specific lists, both YA and children’s, because at my library, they are shelved in both. And because I am a librarian and we love to spread good information far and wide, I’m sharing my lists here.

This entry was posted on Tuesday, May 29th, 2018 at 2:00 PM and is filed under Ramblings. You can follow any responses to this entry through the RSS 2.0 feed. Both comments and pings are currently closed.

One Response to The Great American Read