PROMISE NOT TO TELL by Jayne Ann Krentz 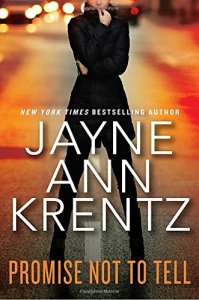 Krentz has successfully published a multitude of well written novels utilizing three separate pen names. Those that I have been fortunate enough to read are all concisely written, capture the reader’s attention, and retain it throughout the book. No problem with “Promise Not to Tell;” it offers a well thought out and interesting plot, principal characters that are right on the money and an adventure that will definitely keep the reader intrigued and unable to put the book down.

Virginia Troy, an owner of an art gallery in Seattle, was one of many children caught in the machinations of a cult in their childhood. Her nightmares don’t leave her as she relives a narrow escape again and again from a fire set by the Cult founder to a small building with cult members in it. Her life and the lives of others were saved when a bystander uses an auto to smash into the building and save some of those imprisoned there. Now she is jolted when an artist featured in her gallery commits suicide, but not before sending a painting to Virginia. The painting causes her to doubt that the death was a suicide and additionally to further sink back into her own past.

Virginia decides to hire Cabot Sutter to look into the suicide. Sutter is a private investigator and another of the children that survived the long ago fire. Krentz portrays the hunt for answers in a logical progression towards solutions. The investigation proceeds quite realistically and in no way presents impossible actions.  Both can be physically hurt, and if so do not wake up and seconds later move forward as if nothing has happened.  That there are sparks between the two is not an impossibility.  Both have the mental scars of the long ago fire and each has the patience and inherent wisdom to understand that such an event and proximity to death just doesn’t go away.

A very well done addition to this author’s long list of good books.

This entry was posted on Sunday, January 7th, 2018 at 6:00 AM and is filed under Book Reviews, Crime Fiction, Fiction. You can follow any responses to this entry through the RSS 2.0 feed. Both comments and pings are currently closed.