SOMEONE TO WED by Mary Balogh 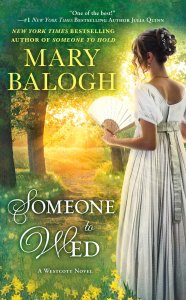 Due to an illegal marriage, Alexander Westcott finds himself the new Earl of Riverdale. This was not something he coveted, especially when he finds that the previous Earl has let the estate go into disrepair. Alexander didn’t inherit money in addition to his title, so as the gentry is wont to do, he must marry money.

Wren Heyden is a neighbor of the new Earl. She has been a recluse for most of her life. Born with a large strawberry birthmark covering half of her face, she was scorned and abused by her parents until a kindly aunt took her in. She married well, and they adopted Wren, giving her a comfortable life, albeit a lonely one of her own choosing. When her aunt and uncle die, she inherits everything.

The young heiress only wants for one thing; a husband. She invites a few of her unmarried male neighbors to visit, hoping to find a husband in one of them and is quite taken with the Earl. But as much as he needs to marry for money, he isn’t going to rush into anything. They agree to start a courtship, and Wren finds herself in way over her head. He has social obligations, a large family, and wants her to participate in his life. She is very much afraid, but takes small steps to that end, and finds herself falling for Alexander.

Alexander is not looking for great passion, just companionship, and affection. But the relationship deepens, much to both of their surprise. But Wren has to learn to get past  her abusive childhood, and with Alexander’s help, she does.

This is an interesting, lovely romance from Balogh. The sex is more sensual than explicit, but the romance rings true. Another wonderful entry into the Westcott series.

This entry was posted on Friday, November 17th, 2017 at 6:00 AM and is filed under Book Reviews, Fiction, Romance. You can follow any responses to this entry through the RSS 2.0 feed. Both comments and pings are currently closed.