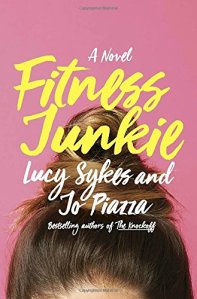 I first heard about this book from The Skimm, a daily news update I get every morning. It’s a fun way to get the news and these days I need all the fun I can get with my news. Every now and then they include a book recommendation and this one came up the other day and it sounded cute. It was.

As someone who has battled weight issues for most of my life, it was hard to take this book seriously but I was not meant to. It centers around Janey Sweet, the CEO of a high-end designer wedding gown company that doesn’t make a dress in a size larger than 4 (really.) Janey is partners with Beau, her best friend since childhood. Beau is the bitchy, gay stereotypical designer who is completely obsessed with diet and weight. He confronts Janey with a photo taken at a fashion show that shows her eating junk food. He demands she drop thirty pounds per their contract, and not return to work until she does.

Janey is devastated but turns to her girlfriends for help and moral support. Her best friend C.J. immediately takes her under her wing and they start visiting one crazy workout place after another. Janey’s cousin Ivy teaches a spin class at SoarBarre, one of the hottest places to be seen in town. Ivy has always been a kind person, but her clients at SoarBarre aren’t happy unless she is abusing them. She is in therapy for this dichotomy in her life.

But the pinnacle of workouts is something called simply, “The Workout,” started by Sara Strong in partnership with a Gwyneth Paltrow type clone. They have a falling out but the Workout lives on anyway.  It changes its secret location every month, and clients have to be invited to partake. Janey meets a woman who claims to be a shaman and she befriends Janey and invites her.

Janey misses her work, misses Beau but doesn’t miss her ex-husband at all and starts dating, a younger man who she thinks works at the juice bar and takes her dumpster diving at Whole Foods for dinner, and a wealthy, older man she meets through the shaman. The workouts get crazier and culminate in an invitation-only “retreat,” an 8 day, women only, $15,000 party in St. Lucia. Janey ends up in the hospital and learns the lesson that you are only as beautiful as you feel and it doesn’t matter what your weight is. She also figures out that her relationship with Beau isn’t what she always thought it was.

This is a book that could only be set in New York City.  The mindset of New York women who truly believe what my mother always told me, you can never be too rich or too thin, is beautifully satirized here. Some nice shots are taken at Goop and the whole idea of lifestyle ridiculousness that these women swear by. There is not much depth to the story, the only character we really get to know is Janey, but I think that was kind of the point; a shallow read about shallow people and the insanity of our fitness-crazed culture. It was a fun read, and even though I’m from New York and know women like this, it only added to my enjoyment.

This entry was posted on Friday, August 25th, 2017 at 6:00 AM and is filed under Book Reviews, Fiction, Women's Fiction. You can follow any responses to this entry through the RSS 2.0 feed. Both comments and pings are currently closed.