MAP OF THE HEART by Susan Wiggs 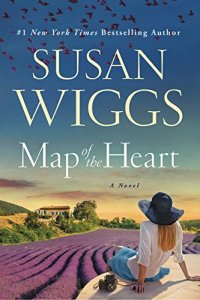 This is a compelling read about families, heartbreak, World War II, secrets, bullying, but mostly love.

Camille Adams lives in a small seaside town in Delaware with her teenage daughter. Camille was widowed five years earlier when her husband died in a tragic accident, and really hasn’t gotten over it. She has become an obsessive worrier, sheltering her daughter to the point where she has to rebel and she does with almost devastating results.

Professor Malcolm Finnemore, Finn to everyone, studies old photographs and other evidence trying to find missing soldiers to return their remains home. His searches were sparked by his own father, whom he never met. His father was one of the many missing in action in Vietnam, and Finn has spent his life searching for him.

Camille is a photographer, but more than that, she can develop old film, often thought to be damaged beyond repair. When Finn sends her the last roll of film his father ever took, she accidentally ruins it when she has to rush to the emergency room for her daughter. He storms to her house and confronts her, and she feels terrible – they both do. A few hours later, he is back. Their attraction to one another is strong, and he asks for a do-over but he is returning to teach in the south of France, and she doesn’t want to get involved with anyone. But…

In another plot line, Camille’s father is from the south of France. He doesn’t discuss his childhood much other than it wasn’t always pleasant. Due to a series of events, he finally admits to her that his father was a Nazi sympathizer who was killed, and as a result, he was bullied until he left the small village. The story eventually moves back to the 1940’s and what happened in that village, and as they say, the plot thickens!

This was a very compelling read on both story lines. Wiggs excels at weaving a World War II story into a contemporary one. She did it beautifully in The Apple Orchard and The Beekeeper’s Ball, both excellent reads – as is this one. I loved it.

This entry was posted on Tuesday, August 22nd, 2017 at 6:00 AM and is filed under Book Reviews, Fiction, Women's Fiction. You can follow any responses to this entry through the RSS 2.0 feed. Both comments and pings are currently closed.