THE GOOD DAUGHTER by Karin Slaughter 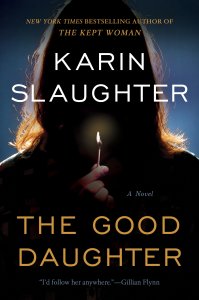 Most review copies I receive these days are digital, and I never thought I’d say this but I actually prefer it. Particularly because I don’t need to wear my glasses, but also because I don’t need a light on, and if I don’t care for something or I’m not in the mood for what I am reading I can easily switch to another book. It was not that long ago when a receptionist at a doctor’s office inquired why I was carrying two books and I had to explain that I only had a chapter left in one and would probably need the other before I saw the doctor. I know she thought I was crazy, and I didn’t really care, but two hardcovers are especially annoying to carry around. I usually have several books going at once, and to be able to carry them all around with me so easily (thank you, Kindle Paperwhite!) is truly a joy.

I tell you all this because I made the mistake of putting aside a pretty good book (that was women’s fiction) because I was in the mood for something grittier. The problem was that it was 9:00 at night, and this – The Good Daughter – was the book I picked up. Almost immediately I realized the error of my ways, this book was too good to put down and it was going to be a very late night, with an early morning at work to follow. Eventually, I had to go to sleep but I finished it the next day, spending every break and my lunch hour to do so. This is a standalone but also set in Georgia like Slaughter’s terrific Grant County/Will Trent series.

Charlotte and Samantha Quinn are sisters living out in the country in rural Georgia. Their father is a lawyer, a defense lawyer to be more precise, who repeatedly vexes the townsfolk by defending, well, criminals. And usually getting them off. To the point where two armed men come to their home one day to kill him – but he’s not there. Instead, they kill his wife and take the girls out into the woods. One is shot and buried, the other takes off running but is attacked by one of the men. That is all the story we get as the book opens, and then it is 28 years later.

The girls are both alive, both lawyers, but estranged. Charlie is working in her father’s practice, Sam is a patent lawyer in New York City. Then tragedy once again rears its ugly head in this small town, this time a school shooting. And Charlie is there.

As that story unfurls, so does the girls past and we get more details, a bit at a time. The stories are intertwined, but we don’t learn how for quite a while and the tension keeps growing. This is suspense at its best, with characters we care about and a complex storyline that is truly gripping. The violence is brutal; as Slaughter fans know, she holds nothing back. But never is it gratuitous, either.

This is an excellent read and one of my favorite thrillers this year for sure. Don’t miss it!

This entry was posted on Wednesday, August 16th, 2017 at 6:00 AM and is filed under Book Reviews, Crime Fiction, Fiction. You can follow any responses to this entry through the RSS 2.0 feed. Both comments and pings are currently closed.

2 Responses to THE GOOD DAUGHTER by Karin Slaughter