DISCOVERING YOU by Brenda Novak 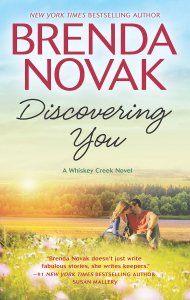 The publisher, Mira, sent me this book a while back and it’s been in my mass market  to-be-read pile for a few months, but I’m happy to say I’ve worked my way down and have only one or two more books to go in that pile….at least until the Fedex man shows up later today. This was my first Brenda Novak book.

Novak writes romantic suspense, which is not my favorite genre and I don’t understand why exactly. I love suspense, I love romance, but I don’t always love them mixed together. That said, this was a quick read and I did enjoy it.

This may be the tenth book in this series, but I didn’t feel like I was missing anything. I can guess at a few of the romances that came before, and the one that’s coming next, but it definitely works as a first read in the series, at least for me. I know there are readers who only read series in order but while there are some series that definitely require that, most romances don’t. And apparently romantic suspense, at least the ones that I’ve read.

India recently moved to Whiskey Creek, right next door to the Amos family. Middle son Rod takes notice; well, actually all the men do, India is beautiful. But she’s moved to start her life over after her husband was murdered by her ex-boyfriend, right in front of her. Her in-laws are keeping her young daughter for a month to allow her time to get settled, and all them time to spend with their granddaughter but the relationship between India and her in-laws is strained at best.

India meets Rod when she picks him up from the side of the road. Someone has ran him down on his motorcycle, and Rod went after the guy, beating him unconscious. They find themselves confiding in one another rather quickly, and the relationship blooms, which makes India somewhat uncomfortable.

Her ex was released from jail after his trial ended in a hung jury, and he is still obsessed with India. And that is at the heart of the suspense here.

If you haven’t tried Novak, this seems like a good place as any to start. Her reviews are generally quite good and I can certainly understand why. If you like romantic suspense, I highly recommend this book.

This entry was posted on Friday, September 9th, 2016 at 6:00 AM and is filed under Book Reviews, Crime Fiction, Fiction, Romance. You can follow any responses to this entry through the RSS 2.0 feed. Both comments and pings are currently closed.