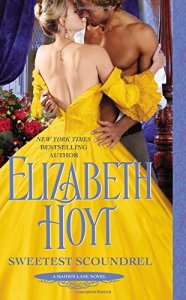 Way back in 2010, I read a couple of Hoyt books in The Legend of the Four Soldiers series and I liked them a lot. But I haven’t read her since; why, I’m not sure. After reading Sweetest Scoundrel, she is definitely back on my radar.

As my regular readers know, I work with a woman who is a huge romance reader and she often recommends books for me, which is how I found Hoyt originally. I picked up this book because it was short listed for the Romantic Times “Historical Romance of the Year  for 2015. I’d actually read most of the other books on that list so now I’m trying to hunt down the few I missed. If you like historical romances, it’s a great way to find new books to try.

Sweetest Scoundrel is a very fitting title. This book was a bit different than the usual because the main characters weren’t titled. Our hero is Asa Makepeace, AKA Mr. Harte, owner of Harte’s Folly, a theater and garden of entertainment. He is in the process of rebuilding, using funds from his backer, a Duke, although we never actually meet him. Instead, we meet his man of business, who in this case happens to be his half-sister, Eve Dunwoody.

Eve’s father was a Duke, but Eve is a by-blow, but her half brother takes care of her. Eve suffers from a traumatic event that happened earlier in her life, rendering her terrified of dogs and men. Her brother has provided her with a bodyguard who has been with her for ten years.

When Eve approaches Harte about how he’s spending his money, she is quaking in her shoes. He is a big, virile man, just the type to terrify her. But she is resolute and determined to go about her business. She moves a small desk into his office and begins her accounting of his books – or lack thereof.

This entry was posted on Sunday, April 24th, 2016 at 6:00 AM and is filed under Book Reviews, Fiction, Romance. You can follow any responses to this entry through the RSS 2.0 feed. Both comments and pings are currently closed.