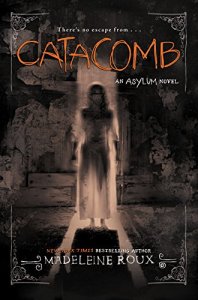 Dan, Abby, and Jordan have survived Brookline Asylum and Warden Crawford and his henchmen twice now and are due some downtime. Plus, they’ll all be headed off to college soon – or at least Dan and Jordan will, Abby is still undecided. So when Jordan packs up to move to New Orleans where he’ll be living with his more accepting uncle, the three decide it’s a great opportunity for a road trip. What they don’t know and can’t even begin to suspect, is that they are still yet to be free of the shadow of Brookline Asylum.

This third title in the series finally answers some of the questions Dan and the readers have had about his parentage. And what better place to set that tale than one of the most mysterious cities in the United States?

I loved the fact that the book brought the trio to New Orleans, but I honestly expected something of a different story. We already knew that there was a character in Sanctum connected to Louisiana and that character does ultimately play a hefty role in this third story just not in the way I’d expected (meaning I kind of expected some of the plantation stuff hinted at in Sactum). That aside, it was definitely a welcome return to Dan and his friends.

The story does loosely connect to Brookline Asylum, but is less asylum and experiments and more voodoo and conjuring (appropriate for the setting). And of course we do have more of my favorite aspect of the series – the weird photos to set the tone of the story. While this third installment didn’t take the exact route I thought it would, it was a nice surprise in terms of the change of direction in keeping the series going.

This entry was posted on Thursday, September 24th, 2015 at 6:00 AM and is filed under Book Reviews, Crime Fiction, Fiction, Horror. You can follow any responses to this entry through the RSS 2.0 feed. Both comments and pings are currently closed.

2 Responses to CATACOMB by Madeleine Roux