THE ADVOCATE’S DAUGHTER by Anthony Franze

I  haven’t read a legal thriller this good in a long time.

Sean Serrat is a lawyer in Washington D.C. who has just moved from the public sector, where he argued several cases in front of the Supreme Court, to the private sector. His wife thinks he is a workaholic and moving to an office where he has a staff to do things for him should make their home life somewhat easier. At least until his name gets put on the short list for an opening on the Supreme Court itself.

The Serrats have three children, and their eldest, Abby, is a shining star almost ready to graduate law school, following in her parents’ footsteps. Sean’s wife gave up her career to be a stay at home mom, and she still is there for their teenage son Ryan as well as their youngest.

Then Abby goes missing and her body is found in the Supreme Court library. Her boyfriend, Malik Montgomery is a law clerk at the court and of course is the first suspect. When the cops find some evidence that points his way, he is arrested but Sean isn’t so sure he is the murderer. This adds another layer to the novel as his arrest brings in racial overtones to the case.

There are a lot of variables in this story and the pacing is relentless, making this an all nighter for me. The characters are well developed and the family scenes especially rang true. And I loved all the details about the Supreme Court, a place most of us don’t know much about (and be sure to read the notes at the end, but only after you read the book!)

This book put me in mind of The Tenth Justice by Brad Meltzer, his first book and still one of my favorite legal thrillers ever. Franze is in excellent company here and I look forward to more from this author.

Comments Off on THE ADVOCATE’S DAUGHTER by Anthony Franze |

A rapid fire novel about the military and two men posed against each other in a conflict generated by events in combat. John Hayes and Thomas Byrne were together in combat and were as close as men can be when allied in battling the enemy.

Byrne was a medic while Hayes was a Special Operations leader. Thomas Byrne left the unit in order to become a doctor and succeeded in doing so leaving the combat role. In the meanwhile, John Hayes seemingly betrayed the men under him causing their deaths during a deep cover operation. Disgraced and on the run from authorities, Hayes is determined to return to the United States and get back to his wife and daughter. He also wants to take revenge against those people that have caused him to be labeled “traitor.”

Due to the past friendship and close contact with Hayes, Thomas Byrne is called back into service as a means of finding and capturing him. John and a squad loyal to him are responsible for a series of attacks aimed at the people that have accused him of being a traitor. The events move rapidly as Thomas Byrne goes after his former friend.

Quirk creates a story that twists and turns in its progress towards a powerful conclusion. This is certainly an all nighter, and succeeds in capturing the reader right at the start. Very well done and certainly a novel that will cause anyone reading it to look for the next Quirk book.

Comments Off on COLD BARREL ZERO by Matthew Quirk | 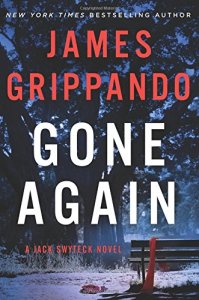 In an afterward, Grippando, the creator of Jack Swyteck, an attorney practicing in Florida, indicates that he is sending Jack back into his literary roots. This is exactly what is done as Swyteck becomes involved with defending a prisoner on death row as he did in the first novel introducing him, The Pardon.

A young girl named Sashi Burgette disappeared on her way to school three previously. While a body was never found, an ex-con named Dylan Kyle was stopped for drunken driving shortly after the disappearance was reported. An article of Sashi’s clothing was found in his vehicle and a police video of Kyle’s drunken explanation of events provided enough circumstantial evidence for a jury to convict him of murder.

A few days prior to Kyle’s execution, Sashi’s mother visits Swyteck, who is doing pro bono work at the Freedom Institute and blurts out that she received a phone call from her daughter,indicating that she is still alive. Jack, in the interest of justice being served, jumps into the case in spite of the police indicating the call is a hoax, the death warrant already signed by the governor of Florida, and the state attorney declaring that the case is closed.

Grippando proceeds to grab the reader with twists and turns of the story that seemingly complicate events beyond any readily visible solution. And, at the same time Jack’s wife, Andie Henning, is about to have a baby. Andie works for the FBI normally doing undercover work. While still able to handle work prior to going on maternity leave, Andie discovers some details related to the crime Jack is working on.  She is not able to pass the information onto Jack due to constraints placed on what she can divulge, but does manage to provide some help to her husband.

The book is by any definition an all nighter as are the previous novels in the Swyteck series and certainly motivates readers to seek out the next in this series.

Comments Off on GONE AGAIN by James Grippando |