THE UNWILLING by John Hart 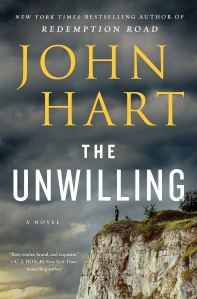 Set in the South at the height of the Vietnam War, The Unwilling combines crime, suspense and searing glimpses into the human mind and soul in New York Times bestselling author John Hart’s singular style.

Gibby’s older brothers have already been to war. One died there. The other came back misunderstood and hard, a decorated killer now freshly released from a three-year stint in prison.

Jason won’t speak of the war or of his time behind bars, but he wants a relationship with the younger brother he hasn’t known for years. Determined to make that connection, he coaxes Gibby into a day at the lake: long hours of sunshine and whisky and older women.

But the day turns ugly when the four encounter a prison transfer bus on a stretch of empty road. Beautiful but drunk, one of the women taunts the prisoners, leading to a riot on the bus. The woman finds it funny in the moment, but is savagely murdered soon after.

Given his violent history, suspicion turns first to Jason; but when the second woman is kidnapped, the police suspect Gibby, too. Determined to prove Jason innocent, Gibby must avoid the cops and dive deep into his brother’s hidden life, a dark world of heroin, guns and outlaw motorcycle gangs.

What he discovers there is a truth more disturbing than he could have imagined: not just the identity of the killer and the reasons for Tyra’s murder, but the forces that shaped his brother in Vietnam, the reason he was framed, and why the most dangerous man alive wants him back in prison.

This is crime fiction at its most raw, an exploration of family and the past, of prison and war and the indelible marks they leave.

John Hart presents his latest novel based in the south of the United States during the Vietnam war. The wide-ranging and compelling story involves the price soldiers pay for fighting in war, family ties, an organized world of master criminals, and the coming of age of a young man.

Gabriel (Gibby’s) two older brothers have already fought in the war – one was killed in action, the other received a dishonorable discharge, and came home only to be sent to prison where he served several years. Their father is a long time police detective married to the love of his life, a lady whose background includes being an heiress. Gibby’s mother blames Jason, the brother returning from war, for the death of his brother, and refuses to see him. She has also made it clear to her husband that he is not to allow Gibby to meet with Jason as that would expose him to a bad influence.

But blood ties will out and Gibby secretly meets Jason spending a day with him and the company of two women. During the day one of the women manages to taunt a busload of convicts being transported along a public highway. These prisoners are from the institution that Jason had served his time in, and a master criminal actually running the inside of the jail arranges for the murder of the woman that did the taunting.

Jason is blamed for the murder and re-sent to the jail he had served his sentence in for safekeeping while awaiting trial. The events see Gibby deciding to prove his brother innocent of the murder and with the help of his best friend and a young lady that is becoming his girlfriend, go after the facts proving that Jason is innocent.

Hart tells the story with attention to building the characters of the principal protagonists, including that of a psychopathic killer awaiting execution at the prison. His prose flows freely and easily brings his readers into a mesmerized state while enjoying the book. A definite all-night read with another fascinating book to John Hart’s credit.

This entry was posted on Tuesday, February 2nd, 2021 at 8:00 AM and is filed under Book Reviews, Crime Fiction. You can follow any responses to this entry through the RSS 2.0 feed. Both comments and pings are currently closed.