THE ABSTAINER by Ian McGuire 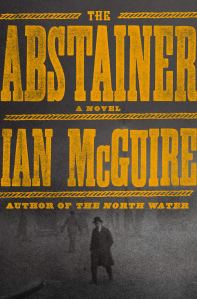 An Irishman in nineteenth-century England is forced to take sides when his nephew joins the bloody underground movement for independence in this propulsive novel from the acclaimed author of The North Water.

Manchester, England, 1867. The rebels will be hanged at dawn, and their brotherhood is already plotting its revenge.

Stephen Doyle, an Irish-American veteran of the Civil War, arrives in Manchester from New York with a thirst for blood. He has joined the Fenians, a secret society intent on ending British rule in Ireland by any means necessary. Head Constable James O’Connor has fled grief and drink in Dublin for a sober start in Manchester. His job is to discover and thwart the Fenians’ plans whatever they might be. When a long-lost nephew arrives on O’Connor’s doorstep looking for work, he cannot foresee the way his fragile new life will be imperiled—and how his and Doyle’s fates will become fatally intertwined.

In this propulsive tale of the underground war for Irish independence, the author of The North Water once again transports readers to a time when blood begot blood. Moving from the dirt and uproar of industrial Manchester to the quiet hills of rural Pennsylvania, The Abstainer is a searing novel in which two men, haunted by their pasts and driven forward by the need for justice and retribution, must fight for life and legacy.

Ian McGuire brings us into the mid 19th century in a very well-done novel set during a period just after Ireland had suffered through a potato famine with consequences of depressed economic conditions. Land was mainly owned by transplanted British nobility and the Irish were focused on winning their liberty and their land back from England. A secret society termed “Fenians” waged underground war against England and their military and police based in Ireland to enforce British rule. Most of the population lived in abject poverty with roots in the potato famine. The story opens with the hanging of three Irish rebels for the crime of killing a police officer. The Irish underground is already planning a campaign of retaliation against British authority with the author introducing persona from both sides of the conflict and allowing their views to be aired as a necessary adjunct to the story.

Stephen Doyle, an Irish American who had lived in the U.S and had served with the Union army during the American civil war, returns to his native country filled with rage and anxious to shed blood. He moves into the city of Manchester and quickly joins the Fenians with the idea to cause havoc among the British. At the same time, head constable James O’Connor enters the scene. He had worked in Dublin but had become an alcoholic to escape the trauma of his young wife dying. He is sent to Manchester as a last chance to redeem himself and is determined to do so. When a long-lost nephew shows up at his house looking for work it creates a conflict that will put O’Connor and Doyle against each other in a situation that only killing will solve.

The novel is definitely enhanced by the author’s knowledge of and descriptions of the economic and political conditions in both Ireland and the United States in a period after the Civil War. The reason that O’Connor and Doyle became deadly enemies is logically tied into the conditions both men faced in their lives and in the areas they lived in during the action. Definitely, a novel that will capture its readers causing a good deal of loss of sleep and the obvious desire to pick up McGuire’s next novel.

This entry was posted on Tuesday, September 22nd, 2020 at 8:02 AM and is filed under Book Reviews. You can follow any responses to this entry through the RSS 2.0 feed. Both comments and pings are currently closed.