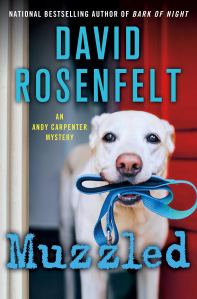 In David Rosenfelt’s Andy Carpenter mystery, Muzzled, Andy and his beloved golden retriever, Tara, are back on the case as a favor to a friend.

Andy Carpenter is a lawyer who would rather not practice law. He’d rather spend his time working with the Tara Foundation, his dog rescue organization, and being with his family and his two dogs, Tara and Sebastian. But when a friend asks him for a favor that involves both dogs and his lawyerly expertise, he can’t say no.

Andy’s friend Beth has found a stray that seems to have belonged to a murder victim–in fact, the man and two of his colleagues died in an explosion a few weeks ago. But when the murdered man contacts Beth, asking for his dog back, Andy knows there must be more to the story. The man claims his life is in danger, and that’s why he disappeared. As much as Andy doesn’t want to get involved–anything to avoid a new case–he can’t help but come to the rescue of a man who’d risk everything, even his life, to reunite with his dog.

Once again, David Rosenfelt delivers suspense and laughter in equal measure in another engaging mystery from “one of the most unforgettable voices in the genre.”

I’m happy to announce the coming across of another in the long and welcome line of novels featuring the adventures of Andy Carpenter. As in the previous books, Andy is accompanied by his stalwart companions including his wife, Laurie, who was a policewoman, his best friend Willy, who is his partner in a business providing dogs for adoption, the very vocal Marcus, his office manager who has developed an antipathy to work, and other sundry characters populating these books.

What is missing is the usual happy ending in which Andy, openly reluctant to working in his profession of defense attorney due to a large inheritance, is forced to handle a case and manages to resolve it successfully. While the happy ending is conspicuously missing in the novel you can bet that all of the dogs that take part in the story end up well.

The story opens in the usual way, Andy must see to the well being of a dog whose owner may soon be sent to prison for murder. Now it does seem strange that the owner is looking for someone to care for his dog when he was blown to pieces along with two other men on a boat they were riding in before the story starts. Don’t worry, all will be explained as we go along, but in the meanwhile, we are treated to David Rosenfelt’s inimitable style of humor, sarcasm, a lot of attention to the dogs involved in the story and the solving of the conundrum of an interesting tale.

I don’t remember if I ever read an Andy Carpenter story that wasn’t a five-star book and in no way boring, in spite of the seeming repetitiveness of the stories. “Muzzled” continues the author’s streak of winners and my recommendation is to read this novel then get on line for the next one as soon as available. And oh yes, don’t worry too much about the ending that is not a happy one. Remember, the dogs come out okay.

This entry was posted on Friday, July 10th, 2020 at 8:00 AM and is filed under Book Reviews, Crime Fiction. You can follow any responses to this entry through the RSS 2.0 feed. Both comments and pings are currently closed.

2 Responses to MUZZLED by David Rosenfelt