THE NICKEL BOYS by Colson Whitehead 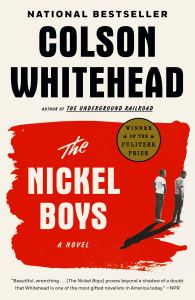 WINNER OF THE PULITZER PRIZE

WINNER OF THE KIRKUS PRIZE

LONGLISTED FOR THE NATIONAL BOOK AWARD

LONGLISTED FOR THE ORWELL PRIZE FOR POLITICAL FICTION 2020

In this bravura follow-up to the Pulitzer Prize and National Book Award-winning #1 New York Times bestseller The Underground Railroad, Colson Whitehead brilliantly dramatizes another strand of American history through the story of two boys sentenced to a hellish reform school in Jim Crow-era Florida.

When Elwood Curtis, a black boy growing up in 1960s Tallahassee, is unfairly sentenced to a juvenile reformatory called the Nickel Academy, he finds himself trapped in a grotesque chamber of horrors. Elwood’s only salvation is his friendship with fellow “delinquent” Turner, which deepens despite Turner’s conviction that Elwood is hopelessly naive, that the world is crooked, and that the only way to survive is to scheme and avoid trouble. As life at the Academy becomes ever more perilous, the tension between Elwood’s ideals and Turner’s skepticism leads to a decision whose repercussions will echo down the decades.

Based on the real story of a reform school that operated for 111 years and warped the lives of thousands of children, The Nickel Boys is a devastating, driven narrative that showcases a great American novelist writing at the height of his powers.

There is not a whole lot I can add to all the praises sung about this book because I totally agree. If you have not read Colson Whitehead, this is a fantastic place to start. This is a short book, only 224 pages, but they are powerful pages. There is not a wasted word.

I also loved The Underground Railroad, so if you like this book, definitely try that one. I would be remiss if I didn’t point out that Colson Whitehead has won the Pulitzer Prize for Fiction for both of these books. Lest you think that is no big deal, let me point out that this is a very, very big deal. Only three other authors have ever won two Pulitzers for fiction: Booth Tarkington, William Faulkner, and John Updike. So not Hemingway, not Faulkner, not Steinbeck. And although my Bachelor’s degree is in English Literature, I’ve never read Tarkington and I’m really not familiar with his work, although a film was made of his 1919 win for The Magnificent Ambersons. But I digress.

With everything going on in this country right now, it is the perfect moment to read The Nickel Boys. It is a powerful, moving story – devastating is truly the right word. It is a novel, but it is based on a true story. Whitehead includes several references at the end of the book and it is worthwhile looking at them.

Even though it is a very short book, I took my time reading it. Some of the passages in the story are just heartbreaking, and I wanted to give it the consideration I felt it deserved. It is an emotional read for sure, with a shocking twist at the end. How can I love a book that tells such an overwhelmingly disturbing story? Because Whitehead is a superb storyteller, and he’s written an unforgettable book. Don’t miss it.

This entry was posted on Monday, June 29th, 2020 at 8:49 AM and is filed under Book Reviews, Fiction. You can follow any responses to this entry through the RSS 2.0 feed. Both comments and pings are currently closed.