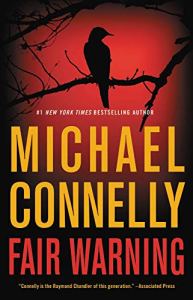 The hero of The Poet and The Scarecrow is back in the new thriller from #1 New York Times bestselling author Michael Connelly. Jack McEvoy, the journalist who never backs down, tracks a serial killer who has been operating completely under the radar–until now.
Veteran reporter Jack McEvoy has taken down killers before, but when a woman he had a one-night stand with is murdered in a particularly brutal way, McEvoy realizes he might be facing a criminal mind unlike any he’s ever encountered.
Jack investigates–against the warnings of the police and his own editor–and makes a shocking discovery that connects the crime to other mysterious deaths across the country. Undetected by law enforcement, a vicious killer has been hunting women, using genetic data to select and stalk his targets.
Uncovering the murkiest corners of the dark web, Jack races to find and protect the last source who can lead him to his quarry. But the killer has already chosen his next target, and he’s ready to strike.
Terrifying and unputdownable, Fair Warning shows once again why “Michael Connelly has earned his place in the pantheon of great crime fiction writers” (Chicago Sun-Times).

It seems like Jack McEvoy, Connelly’s journalist hero, (alter ego?) appears roughly every dozen years or so. The Poet came out in 1996, The Scarecrow in 2009, and now this new McEvoy story in 2020. Let me start off by saying it was worth the wait.

A bit of background on one of my favorite writers. Connelly generally puts out a book a year, and for most of the years since 1996 those books have been stories built around Harry Bosch, then later on alternated with Mickey Haller (The Lincoln Lawyer,) until he brought them both together. He also started a new series featuring a female protagonist, Renee Ballard, a few years ago, but after the first book he folded her in with Bosch. McEvoy stands on his own, except that he has made brief appearances in a couple of Bosch books, and one of the Bosch books, The Narrows, was a sequel to The Poet, a McEvoy book. Basically, Connelly gives his fans these little Easter eggs of characters making brief appearances in different series, and it is  kind of wonderful. To be truthful, I was hoping for a glimpse of either Bosch or Haller as this book is set in Los Angeles but it was not to be. Or I blinked and missed it, which is always a possibility! Anyway, if you are interested in all of Connelly’s books in order, with references to series characters, here you go: https://www.michaelconnelly.com/series/

“Fair Warning” is the name of the online news publication where McEvoy is now working. It is a consumer watchdog type of journalism that often partners up with newspapers like the Los Angeles Times. When McEvoy is questioned about the murder of a woman he had a one night stand with several months earlier, his journalistic interest is piqued. His background is in crime writing but his new employer wants him to stick to their mission. But as soon as McEvoy starts digging, he realizes there is a consumer story of interest here in the companies doing DNA research for the public and privacy. It’s a bit of a stretch, but his editor gives him a bit of time to bring the story home.

McEvoy starts digging, along with one of his co-workers, and then hooks up with his ex, a retired FBI profiler. Between the three of them, they soon realize that the murder that started this whole thing is possibly tied to several others around the country. And DNA privacy laws are at the heart of the whole mess.

As usual, Connelly gives us an unputdownable book with intriguing characters, a familiar setting, and a fast-paced, twisty storyline with a shocker of an ending. If you’ve never read Connelly, this is as good a place to start as any. In my humble opinion, Connelly remains the premier crime writer of our time. Don’t miss this book.

This entry was posted on Tuesday, June 2nd, 2020 at 8:00 AM and is filed under Book Reviews, Fiction, Romance. You can follow any responses to this entry through the RSS 2.0 feed. Both comments and pings are currently closed.