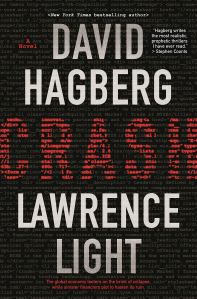 The second Great Depression is coming. The world’s economies are groaning under too much debt. If one thing goes wrong, the entire rickety system collapses. Now, acclaimed award-winning New York Times bestselling novelist David Hagberg and renowned financial reporter Lawrence Light have combined forces to dramatize―hour by hour―how this all-too-real catastrophe could go down in Crash.

With debt-burdened governments and businesses worldwide about to go bust, a cabal of Wall Street big shots plot to destroy the globe’s stock exchanges. To provide that one thing that goes wrong. In 24 hours, a powerful computer worm will smash the exchanges and spark an international panic, pushing a debt-laden world into the abyss. The Wall Street gang’s investment bank will be the last one standing, able to make a killing amid the ruins.

But one person, who works for their bank as a computer expert, spots the worm embedded deep in its network. Cassy Levin invents a program to destroy the cyber-intruder. Angered by Cassy’s discovery, her bosses order her kidnapping.

Her boyfriend, a former Navy SEAL, is alarmed at Cassy’s disappearance and unravels the plot. Ben Whalen only has until the next morning to save the woman he loves and prevent the economic apocalypse.

This story is based on the genuine threat posed by towering debt, which will make the 2008 financial crisis look puny.

An interesting, well-written novel and also a warning about the possibility of a major worldwide financial crisis due to the outrageous amounts of debt currently held by nations, companies, and individuals.

A group of Wall Street executives has entered into a plot to wreak havoc in worldwide financial markets by the introduction of a worm into companies’ web sites which will destroy the exchanges and cause panic around the world. Their idea will allow one huge company to escape the devastation of the worm and rake in fortunes buying at the depressed prices which will become available, and then selling at huge premiums over purchase price. Everything seems to be moving towards the fiscal Armageddon planned when one brilliant analyst working for that company comes up with an apparent fix for the worm. Her position is, of course, to advise management and expect that they will jump at the chance to prevent catastrophe. Unfortunately for Cassy Levin, the analyst finding the fix, it is the management that she advises that is setting up the project and to protect themselves, order her kidnapping and killing.

But there is an unknown ace in Cassy’s hand. Her fiancee is an ex-Navy Seal with the fighting skills that this group has. In looking for his love he finds that she has been kidnapped and employs all methods to find her and rescue her.

The story by itself is engrossing with action aplenty and there are lessons in quite a bit of the high finance that is necessary to do what is being planned. As already stated, the authors do make a strong case for a reexamination of the financial freedom that is too easily available. Events occurring in 2008 in the U.S. are brought up in which banks and financial institutions had to be bailed out by the government due to them being overextended. The overreaching by these financial institutions is blamed on the attitude of the Federal Reserve bank itself which in setting rediscount rates for banks regulates the number of loans that can be granted. The loose policies allowed loans freely granted to people and companies that by any analysis could not afford to service them, laying the groundwork for a probable financial collapse only forestalled by a government bailout.

This entry was posted on Wednesday, May 6th, 2020 at 8:00 AM and is filed under Book Reviews, Crime Fiction, Fiction. You can follow any responses to this entry through the RSS 2.0 feed. You can leave a response, or trackback from your own site.